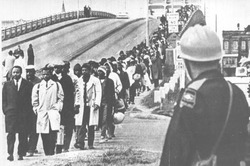 Two weeks ago, a federal judge partially granted class certification in a lawsuit seeking to hold the Gretna Police Department and the Jefferson Parish Sheriff's Office accountable for their actions in the aftermath of Katrina. The lawsuit addresses the actions of police on the Crescent City Connection Bridge, when New Orleanians who tried to escape from the flooded city were shot at by police.

Last week, attorneys filed an offshoot case in Orleans Civil District Court, which also names Crescent City Connection Police Chief Michael Helmstetter and the state of Louisiana as defendants. The Times-Picayune reports, "As state entities, they are immune under federal law, but not state law, said attorney Adele Owen of the Schmolke Firm in Baton Rouge, which filed the case with Cleo Fields."

According to a copy of the lawsuit obtained by Louisiana Justice Institute, "The police officers employed by the Gretna Police Department, Jefferson Parish Sheriff's Office, and the Crescent City Connection Bridge Police acted willfully, deliberately, maliciously, and with reckless disregard for the petitioners' safety...Further, said policy resulted from an intentional choice, among various alternatives, to follow a course of action which evidences deliberate indifference to the constitutional rights and safety of the petitioners."

This is no rash action in a crisis. There is an abundance of evidence that Gretna police knew exactly what they were doing - and still feel no remorse about it, even to this day. Those that participated in this terrible action felt no empathy for the people of New Orleans.

As the LA Times reported way back in September of 2005, "Little over a week after this mostly white suburb became a symbol of callousness for using armed officers to seal one of the last escape routes from New Orleans -- trapping thousands of mostly black evacuees in the flooded city -- the Gretna City Council passed a resolution supporting the police chief's move. 'This wasn't just one man's decision," Mayor Ronnie C. Harris said Thursday. "The whole community backs it.'"

If a whole community is responsible for a crime, how do you rebuild justice? We hope these lawsuits are a step in the direction of accountability.

This post originally appeared on Justice Roars, the blog of the Louisiana Justice Institute.

Judge hands out tough sentences in post-Katrina killing by police