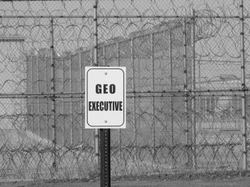 Last winter, a remote Texas prison convulsed in a cry of outrage, voicing the desperation of the immigration system's silenced captives. Two recent articles in the Boston Review and Texas Observer reflect on violent uprisings at the Reeves County Detention Center in Pecos last December and January. Tom Barry and Forrest Wilder describe a system of calculated lawlessness in the heart of Dixie.

The clash was driven by detainees' protests about inhumane conditions, particularly poor medical care and overcrowding. The catalyst was the death of Jesus Galindo, an epileptic who had been isolated in solitary confinement. Immigrant detention has become a political flashpoint for the Obama administration amid reports of abuse and miserably inadequate healthcare.
Although the White House recently pledged to improve detention conditions, there's been little real questioning of the economic underpinnings of the system. The Pecos rebellion illustrated the consequences of marrying America's prison-industrial complex with zero-tolerance immigration enforcement.
As he toured various "prison towns" along the U.S.-Mexico border, Barry observed that "all the prisons I saw had two common features: they were managed and operated by private-prison corporations--including two of the world's largest, Corrections Corporation of America (CCA) and GEO [which runs Reeves]--and they were located in remote, rural areas, invariably described by locals as being 'in the middle of nowhere.'"
The industry, he says, capitalizes on towns hungering for economic development.

The prison industry introduces the governments of desperate communities to what some call "backdoor financing": project revenue bonds in the tens of millions of dollars that suddenly make them feel like economic players....

The full cost of the public-private immigrant prisons that now litter the Southwest and elsewhere is not yet known. Most counties and municipalities are still ten to fifteen years away from paying off the bonds.

The private detention sector works much like the crooked lenders who drove the country into financial crisis, building facilities as "speculative" ventures.
Though business slumped during the 1990s, CCA struck gold with the Bush administration's anti-immigrant crackdowns. Reporting on the Hutto family detention center, Margaret Talbot wrote in the New Yorker, "When immigration detention started its precipitate climb following 9/11, private prison companies eagerly offered their empty beds, and the industry was revitalized."
Wilder describes how the detention boom-bust cycle works in a cash-strapped Texas town:

In the mid-1980s, with the regional economy devastated by the Texas oil bust, local business and government leaders decided to move into a recession-proof industry that was exploding in an increasingly criminalized America: prisons. In 1986, the county built a 300-bed prison. The prison filled rapidly with federal inmates, pumping revenue into the county's budget and adding decent-paying jobs to the local work force. By 2002, Reeves had 2,000 beds. In 2003, the county completed construction on a $39 million, 960-bed unit only to find that the feds had no interest....

While the prison sat empty, payments on the bonds, reduced to junk status, were coming due. On the verge of default, county officials begged the Bush administration to send prisoners and hired Randy DeLay, former House Majority Leader Tom DeLay's brother, to lobby in Washington, D.C. That's when Wackenhut Corrections Corp., now GEO Group, rode to the rescue. In November 2003, GEO agreed to take over management of the whole 3,000-bed prison complex and soon struck a deal with the Bureau of Prisons to fill the new unit.

Now cut to winter 2008. Jesus Galindo, a 32-year-old Mexican American who was caught crossing the border illegally, desperately needed careful treatment for his epilepsy, Wilder reports. Instead, he got locked up in solitary and spiraled toward his death. An autopsy traced the death to his epilepsy and noted signs of medical neglect.
According to a report by the National Immigration Forum, it's unclear exactly how many private entities are working under Immigration and Customs Enforcement, but prison corporations are well fed by federal largess.

The $1.7 billion budget for "Custody Operations" provides ICE with funding to maintain its current detention capacity of 33,400 people in over 500 facilities on any given night, including operational expenses....

The two largest private prison companies in the U.S. each receive over ten percent of their revenue directly from ICE, which pays an average per diem fee of $87.99 for every immigrant detainee.

All this despite the Obama administration's acknowledgement that most detainees pose no real public danger. Many could in fact be monitored safely outside prison at a far lower cost to taxpayers. Nonetheless, ICE pushed privatization as a revenue-boosting scheme in its initial budget proposal for fiscal year 2010.
Even in the midst of a recession, the detention market is looking bullish. Just as Homeland Security announced its detention reform initiatives earlier this month, Business of Detention project reported, CCA unveiled a brand new 500-bed facility in Gainesville, Georgia.
A company spokesperson boasted, "Our positive impact, for more than a decade, on the State of Georgia is considerable, in terms of bringing strong careers to hard-working Georgians and much needed taxes and local dollars."
Profit-driven immigrant detention is just one facet of a much larger epidemic that is destroying poor communities of color across the country. Yet Pecos is an especially striking display of the cruel economics of mass incarceration.
The detainees, as well as those running their prisons, have more in common than they probably know. As economic desperation propels migrants to seek work across the border, impoverished American communities, which are conditioned to dehumanize immigrant workers, gravitate toward a prison business underwritten by draconian federal laws.
And so the machine whirs on, muffling the cries of immigrants like Galindo. Once they're inside, it seems, no one has to listen anymore.
This post originally appeared in RaceWire, the blog of Colorlines magazine, and at Working In These Times.
(Photo: Tom Barry, Transborder Project)