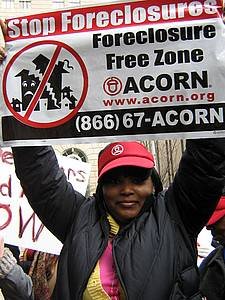 Over the last 18 months, conservatives have launched a nationwide assault on the Association of Community Organizations for Reform Now (ACORN), which is now peaking with widespread media coverage and Congressional action. This isn't the first time that the 37-year-old organization has been under attack.

With chapters in more than half the 50 states, it is arguably the largest national network that consistently organizes truly poor people, the vast majority being immigrants and people of color. In that time, ACORN has helped communities organize for desperately needed changes, from living wage ordinances to policies that protect every child's right to a high quality education. In this time, ACORN has angered many a local politician and multinational corporation, and these folks would be perfectly happy not only to see ACORN go down, but also to deal a blow to poor people organizing for power.

There are three major accusations against the group. First, that there is widespread financial corruption; second that they engage in massive voter fraud; and finally that they have too many different entities hiding their relationship to each other to get around legal limitations. As a natural outgrowth of its organizing, ACORN has provided critical services, including mortgage counseling, voter registration and tax preparation. These services were sometimes funded through federal government contracts, and it is those contracts that Congress is now threatening to end.

The only hard fact is that there was embezzlement. Though problematic, it was addressed both within and outside of the organization. The rest is a mash-up of misinformation with a lot of red-baiting and race-baiting, as Peter Dreier, the Dr. E.P. Clapp Distinguished Professor of Politics, and director of the Urban & Environmental Policy Program at Occidental College in Los Angeles, and others have reported.

These fabrications are designed to arouse distrust of collective action. The campaign against ACORN serves as an attack on organizing as a whole, which no community of color can afford not to do. We can see it from the denunciation of President Obama's background in community organizing to Glenn Beck's attacks on environmental leader Van Jones, cultural leader Yosi Sergeant and FCC Diversity Chief Mark Lloyd. This attack, like those, is a warning to anyone who adopts organizing as a social change strategy.

Does ACORN need tighter internal controls? Certainly, and so do most community organizations, which are perpetually cash-strapped, in part because funders are never interested in funding "overhead" and "administration." If the search for "corruption" among community-based organizations gathers steam, I guarantee that any number of groups will be tied up in investigative hell for years. It's dangerous to imagine that once they're done with ACORN, the right won't come looking for that one mistake you made years ago that can be attached to a bunch of lies to discredit and take down your organization. Obviously, we should pay attention to our inner workings, whether someone is paying for that or not, but even the most rigorous internal scrutiny won't save us from a well-funded opposition that is willing to lie.

The attack on ACORN isn't about fighting corruption. If it was, then dozens of corporations with federal contracts far larger than ACORN's would be under investigation now, or would already have been cut off. The anti-ACORN Senate bill implicates any government contractor that has fraudulent paperwork, or is accused of violating lobbying or campaign finance laws. That list includes Blackwater, the private security contractor that has been implicated in civilian deaths during the Iraq war. Florida Congressman Alan Grayson is collecting a list of such contractors.

Of course, Congress could make ACORN obsolete by passing and enforcing laws that protect poor people from being pushed to the margins of society. Instead of paying ACORN to register voters, the federal government could actually punish voter suppression, which is largely directed at people of color and immigrants. It could adopt automatic voter registration systems that would be triggered by an 18th birthday or driver's license being issued. It could pass predatory lending laws that protect us from insane interest rates, and then ACORN wouldn't have to counsel its members about avoiding foreclosure.

The assault on ACORN is an assault on community organizing. Organizing is essential to building the power of poor people, immigrants and people of color to protect their interests. This is the time to stand up for ACORN, not just to keep this vital part of our national infrastructure, but also to prevent the hate from tying up all of us. That's why we must demand that our election officials and media outlets stop this unwarranted campaign against the poor and people of color.

Rinku Sen is the executive director of the Applied Research Center and the author of "The Accidental American."

VOICES: Poverty is still a dirty word in America