Skip to main content
Join the voice for a changing South.
Donate Today
By Desiree EvansOctober 27, 2009 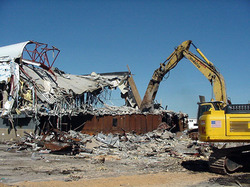 In the days following Hurricane Katrina, contractors converged on the Gulf Coast to work on projects to clean up the hurricane-damaged region.But a clean-up process meant to help the region recover also brought widespread waste, fraud, environmental violations, and threats to public health and safety, according to Public Employees for Environmental Responsibility (PEER).
The Washington, D.C.-based watchdog group reports a severe breakdown in U.S. Army Corps of Engineers management of its contractors tasked with clean-up projects in southern Mississippi in the aftermath of Katrina. PEER obtained documents that show a myriad of ways the Corps "allowed rampant fraud, widespread safety violations and serious threats to public health in its massive Mississippi clean-up operations following Hurricane Katrina," according to the group.
PEER is now calling for a federal review of how the Corps oversaw clean-up operations. In a letter to the Office of Inspector General, PEER explains:

Documents obtained in litigation from the Corps under the Freedom of Information Act depict a vivid picture of a breakdown of many basic protocols: numerous ineligible debris loads, widespread safety violations, traffic accidents, water mains broken by Corps subcontractors, even reports of Corps personnel falling asleep on the job. On at least two occasions, contractors were caught by forest law enforcement personnel in national forests taking down healthy trees undamaged by Hurricane Katrina, intending to pass them off as pay-eligible debris.

Safety violations were so routine on the Mississippi project as to even become unremarkable in the face of much more egregious violations, including numerous examples of contractors, employed by the Corps and paid (by the debris load) with taxpayer dollars, attempting to defraud the public by gathering ineligible debris from outside their contracted hurricane-damaged area in an effort to pad their load totals.

In a statement, PEER underscores that in "paying crews by the amount of debris removed, the Corps created an incentive to cheat as contractors raced to raise their load totals and make more taxpayer money, regardless of whether the material was being safely or legally handled -- or even whether it was, in fact, debris." These violations were compounded by a lack of oversight from quality assurance officers that were overwhelmed and unable to exert control over contractors.
"Corps records portray a Wild West, anything-goes atmosphere where fraud was encouraged and corners were not just cut, they were bulldozed," PEER Counsel Christine Erickson said in a statement. "Since the Corps maintains there were no problems, there will be no lessons learned without outside investigation."