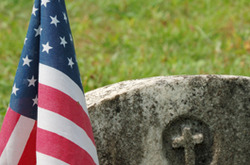 Michael Baranik Jennings called it the worst day of his life.

As he sat in his doctor's office that day in January 2007, he was told he had terminal cancer.

As if that wasn't bad enough, he was also told that his veteran's health care insurance wasn't adequate to cover the number of chemotherapy sessions he would need.

Over the next few weeks, Jennings went from one doctor to another, hoping to find one who would give him the needed treatment.

"Luckily, I begged and begged a doctor, who said he would only give me seven treatments because of insurance," Jennings wrote in a letter to the non-profit, National Nurses Organizing Committee.

But his efforts weren't enough. Jennings died a few months after he was diagnosed with terminal cancer.

Jennings story is not unique. Lack of health insurance claimed the lives of more than 2,266 veterans under the age of 65 last year, says a Harvard Medical School study out today.

"Uninsured veterans are a stain on America's flag," asserted Dr. Steffie Woolhandler, one of the study's three researchers and professor of medicine at the school. "It's particularly striking that a combat veteran who has already served his country is denied [adequate] health care."

The Harvard researchers said that health care reform legislation pending in the House and Senate would not "significantly affect this grim picture."

Only a minority of veterans - those disabled by military service - is automatically eligible for VA care.

Vets who have a combat-related injury and are 100 percent disabled can get full care from the VA, said Allan Campbell, a veteran of the Vietnam war. Campbell said he had to "fight for years and years before he could go from 10 percent care to 100 percent care."

The full-care veterans who live far from a VA hospital or clinic also get reimbursed for travel.

"I am a U.S. Navy vet," wrote a 52-year-old vet from Novato, Calif., to the National Nurses Organizing Committee. "With the VA almost 50 miles from my front door, it just doesn't work for me in case of an emergency-type situation."

The survey found that 1,461,615 veterans between the ages of 18 and 64 were uninsured -- that is, they neither had health insurance nor received ongoing care at Veterans Health Administration hospitals or clinics -- in 2008.

Their research found that being uninsured raises an individual's odds of dying by 40 percent, causing 44,798 deaths in the United States annually among those aged 17 to 64. With that data, Woolhandler and her colleagues arrived at their estimate of 2,266 preventable deaths of non-elderly veterans in 2008.

"Like other uninsured Americans, most uninsured vets are working people - too poor to afford private coverage, but not poor enough to qualify for Medicaid or means-tested VA care," said Woolhandler, who testified before the House Committee on Veterans Affairs in 2007 about uninsured veterans.

The Veterans Eligibility Reform Act opened VA enrollment to all veterans, although non-poor veterans (generally, those earning more than $30,000 a year) were required to make co-payments of up to $50 per day for outpatient care.

However, in 2002, the Bush administration ordered VA regional directors to "stop marketing to enroll Priority 8 veterans," citing lack of financial resources. Enrollment stopped on Jan. 17, 2003. Veterans without service-connected illnesses or disabilities, and with incomes above 80 percent of the median income in their area are classified in the lowest priority group, Priority 8.

Bowing to pressure from veterans' advocates, the Obama administration earlier this year adjusted the income-standards means test. That allowed around 10 percent of uninsured vets to enroll. "But that still left 1.5 million of them uninsured," Woolhandler noted.

Dr. David Himmelstein, co-author of the Harvard study and associate professor of medicine at the school, noted that the "unnecessary deaths will continue under the legislation now before the House and Senate.

"Those bills would do virtually nothing for the uninsured until 2013, and leave at least 17 million uninsured over the long run. We need a solution that works for all veterans - and for all Americans - single-payer national health insurance."

Woolhandler said that allowing stories such as Jennings' to happen, is "a national disgrace," and "a total negation of the service they have given us."

Liz Jacobs, of the California Nurses Association, said Jennings was "very ill" when he contacted them two years ago. In the letter he wrote to the National Nurses Organizing Committee he said, "This is what I get for serving my country for 24 years...If I had known this when I joined, I would never have joined.

"I would have left this country, given up my citizenship and lived in a country where they respect the men and women that protect their freedom."

Study: One in 10 U.S. veterans has no health insurance