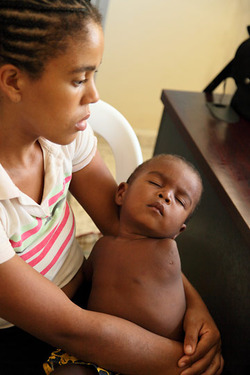 A civil lawsuit filed last week in state court in Delaware charges Arlington, Va-based AES Corp. -- one of the world's largest power companies -- with illegally dumping 160 million pounds of toxic coal ash waste onto beaches in the Caribbean nation of the Dominican Republic, leading to serious health problems for nearby residents.

Filed by a team of attorneys from law firms in New York, Pennsylvania and Delaware, the suit alleges that between 2003 and 2004 AES Corp. and its subsidiaries dumped 100 million pounds of coal ash on the beach near the small village of Arroyo Barril and another 60 million pounds in the Port of Manzanillo near Montecristi -- and that serious health problems resulted:


Since the dumping, babies have been born with severe birth defects including missing limbs, missing organs, cranial malformations and gastrointestinal deformities. Some of these children have died as a result of their injuries. A failed Siamese twin with two heads died shortly after birth. Many women have suffered miscarriages at various stages of their pregnancies. Today, in addition to the severe birth defects, men, women and children of this proud and struggling community continue to suffer with respiratory illnesses and skin rashes.

The child pictured above is believed to be one of those affected. The attorneys say half of the 42 nearby residents it tested had unsafe blood levels of arsenic, a major contaminant of concern in coal ash. There is evidence that inhaled or ingested arsenic can injure the fetus.

The coal ash dumped in the Dominican Republic came from AES's coal-fired power plant in Guayama, Puerto Rico. According to the complaint, authorities there allowed AES to build the plant in 2002 only under the condition that most of the ash generated at the plant was deposited somewhere other than Puerto Rico. The company allegedly chose dumping the waste onto beaches in the Dominican Republic -- where some 30% of citizens live in poverty -- as the cheapest alternative.

The lawsuit also claims that AES and its partners misrepresented to the Dominican government the toxicity of the coal ash and how it would be handled. In 2004, that government found the AES dumping to be in violation of Dominican law as well as the international Basel Convention on hazardous wastes and pursued criminal and civil actions against AES and other responsible parties.

The Miami Herald reports that it was a contractor from Delray Beach, Fla. -- Roger C. Fina -- who hauled the coal ash to the Dominican Republic and dumped it on the beaches:

"He brings this rock ash into the country without any kind of controls or anything. A good portion of it fell to the sea,'' said Andrés Chalas, the Dominican Republic's top environmental prosecutor. "They got permissions to bring it in and said it was to do renovations of the port, but we investigated and there was no such project, not at Public Works or the Port Authority.''

Fina claims that the ash was supposed to be turned into asphalt and was never meant to sit on the beach for two years. The paper reports that after he and AES were sued by the Dominican government, the company paid $6 million to clean up the site, though contamination still remains. Fina says the case has ruined his life and left him out of work.

The lawsuit filed last week on behalf of the injured Dominicans seeks damages from AES and its companies for the human toll caused by the illegal dumping. It also seeks to compel AES to provide a comprehensive medical monitoring program for the plaintiffs during their lifetimes.

(Photos of the deformed Dominican child is from a photo gallery related to the lawsuit.)