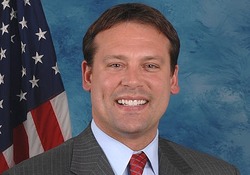 The New York Times reported last week that during the historic House debate on health care reform, statements made by more than a dozen lawmakers were ghostwritten in whole or part by lobbyists working for one of the world's largest biotechnology firms.

The lobbyists for California-based Genentech -- a wholly owned subsidiary of the Swiss firm Roche -- drafted one statement for Democrats and another for Republicans.

But it turns out that Rep. Heath Shuler -- a Democrat from North Carolina -- actually delivered a statement based on the Republican version of the script, as the blog Firedoglake reported yesterday.

Shuler is part of the conservative Blue Dog caucus in the House. When in Washington, he reportedly lives at the C Street house owned by The Family, a controversial right-wing Christian organization that caters to the political elite.

Based on Firedoglake's report, we thought it would be interesting to compare what was said by Rep. Joe Wilson (R-S.C.) -- the lawmaker infamous for shouting "You lie!" during President Obama's national address on health care reform -- during the debate to Shuler's remarks.

We also thought it would be interesting to compare the two lawmakers' campaign contributions from health industry interests.

As we reported previously, Wilson is a major recipient of contributions from health care professionals, who have invested a total of $244,196 in his campaign to date, according to the Center for Responsive Politics OpenSecrets.org database. He received another $86,150 from pharmaceutical companies, $73,050 from insurance companies and $68,000 from hospitals and nursing homes. He has been in office since 2001.

Shuler has also received generous contributions from the pharmaceutical industry, health professionals and insurance interests: All appear among his top 20 contributors at $78,800, $67,062 and $38,500 respectively, according to OpenSecrets.org. He has been in office since 2007.

And now, the comparison of Wilson's and Shuler's lobbyist-inspired comments on health reform:

Wilson: I have criticized many of the provisions of this bill (H.R. 3962) and rightfully so. But in fairness, I do believe the sections relating to the creation of a market for biosimilar products is one area of the bill that strikes the appropriate balance in providing lower cost options to consumers without destroying a healthy and functioning industry in this country.

Shuler: Mr. Speaker, as you know I am opposed to the bill we are considering today for many reasons that I have articulated previously. I am pleased, however, that the bill strikes the appropriate balance on the issue of follow on biologics. This bipartisan compromise language will provide lower cost options to consumers and my constituents  without destroying a healthy and functioning bio-tech industry in this country.

* * *
Wilson: Creating a pathway for new products that doesn't destroy the ability or the incentives for innovator companies to develop breakthrough technologies and at the same time providing a safe and effective way to bring competition to benefit patients is a laudable achievement.

Shuler: I believe it is critical that the creation of a pathway for new products does not destroy the ability or the incentives of innovator companies to develop breakthrough technologies. We have a moral obligation to provide a safe and effective pathway of bringing competition that will benefit patients.

* * *
Wilson: I wish we could remove this provision from this fatally flawed piece of legislation and consider it separately because it would pass with the kind of overwhelming bi-partisan support that Americans across the country wish to see.

Shuler: I wish we could consider this as a stand-alone bill because it would pass with the kind of overwhelming bi-partisan support that Americans across the country wish to see.

* * *
Wilson: One of the reasons I have long supported the U.S. biotechnology industry is that it is a homegrown success story that has been an engine of job creation in this country.

Shuler: One of the reasons I have long supported the U.S. biotechnology industry is that it is a homegrown success story that has been an engine of job creation in this country and in my home state of North Carolina.