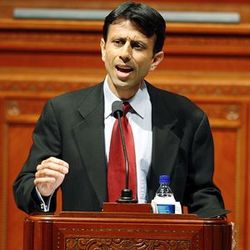 You've heard the story: To "buy" Sen. Mary Landrieu's (D-LA) vote to bring the Senate health bill to the floor last Saturday, Sen. Harry Reid (D-NV) inserted a provision that would deliver up to $300 million in federal Medicaid payments to Louisiana.Mainstream reporters gave it ominous names like "The Louisiana Purchase," and right-wing pundits like Glenn Beck and Rush Limbaugh labeled Landrieu "the most expensive prostitute in the history of prostitution."

But few have mentioned that it was Louisiana Republicans -- including Gov. Bobby Jindal and Congressman Joseph Cao -- who have been the most aggressive advocates for the measure that's now put Landrieu in hot water.

First, a little background: The Senate provision has to do with boosting federal support for Louisiana's Medicaid program, which everyone agrees is in deep crisis. Louisiana stands to lose $450 million-$500 million in federal Medicaid funding next year and $1 billion the year after that.

Why? Because the feds are counting one-time aid given to the state after Hurricane Katrina -- like housing support and insurance grants -- as an increase in household income, causing federal formulas to kick in that will slash Washington's share of Louisiana Medicaid support from the usual 70-73% (up to 80% this year) to 63%.

Gov. Bobby Jindal's administration has said the cuts will be "cataclysmic" for Louisiana, where 26% of residents -- mostly children -- depend on Medicaid for coverage. To fill the gap, Jindal has announced the state will be forced to slash mental health programs. Louisiana also cut Medicaid reimbursements to doctors by 10% -- causing 66% of doctors in one survey to say they'll stop taking new patients.

The state is an especially vulnerable position now: The swine flu epidemic -- which hit Louisiana hard -- drove up the state's Medicaid deficit another $100 million. The economic recession has pushed 22,000 more residents onto Medicaid rolls between July and October.

As a result, Jindal and Alan Levine -- a Republican Jindal hand-picked to become Louisiana's Health Secretary, who formerly worked for Gov. Jeb Bush (R) in Florida -- have been lobbying Washington for eight months to revamp the Medicaid formula to boost payments to Louisiana.

For example, as Jindal's Department of Health and Hospitals argued in a September 2009 brief [pdf]:

Louisiana is one of many states that have faced, and will continue to face, this problem if Congress does not act to mitigate this unintended consequence of the federal matching formula for Medicaid.

The brief calls for a nationwide revamping of the Medicaid reimbursement plan, which would have wiped out the entire $1 billion shortfall Louisiana faced -- much more than the $300 million in the Senate health bill.

Which is why Jindal and Louisiana Republicans haven't criticized Landrieu; in fact, as Levine said after news of the deal broke:

Look, it's good to have a senator in