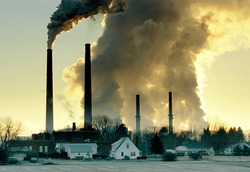 Pollution from coal is not only unhealthy for the environment -- it also hurts the human body and contributes to four of the five leading causes of death in the U.S.: heart disease, cancer, stroke and chronic respiratory disease.

So concludes a new assessment of coal's health effects from Physicians for Social Responsibility. Titled "Coal's Assault on Human Health," the report examines the cumulative harm that coal pollution inflicts on the respiratory, cardiovascular and nervous systems. It also considers coal's contribution to global warming and the health implications of that.

"Detrimental health effects are associated with every aspect of coal's life cycle, including mining, hauling, preparation at the power plant, combustion, and the disposal of post-combustion wastes," the introduction states.

The report examines that entire life cycle, from the high fatal injury rate and chronic health problems suffered by coal miners, to the dust and water pollution that mining inflicts on nearby communities, to how the health-damaging chemicals used in washing coal make their way into water supplies. It also accounts for the enormous amount of pollution emitted by the trucks and trains that haul coal, and the threat presented by the more than 500 coal ash dumps sites across the United States.

It finds that the burning phase of coal's life-cycle takes the greatest toll of all on human health:


Coal combustion releases a combination of toxic chemicals into the environment and contributes significantly to global warming. Coal combustion releases sulfur dioxide, particulate matter (PM), nitrogen oxides, mercury, and dozens of other substances known to be hazardous to human health. Coal combustion contributes to smog through the release of oxides of nitrogen, which react with volatile organic compounds in the presence of sunlight to produce ground-level ozone, the primary ingredient in smog.

The report's findings have important implications for the public health future of the United States in general -- and the South in particular. According to the Sierra Club's database on proposed new coal plants, there are a total of 55 active coal plant projects underway in the U.S., and almost half of those -- 27 in all -- are slated for Southern states*:

These plants should not be built, according to PSR. In fact, the report's policy recommendations call for no new construction of coal-fired power plants so as to avoid increasing health-endangering emissions of carbon dioxide and toxic air pollutants.

The report also calls for cutting carbon dioxide emissions "as deeply and as swiftly as possible" through legislation establishing hard caps on global warming pollution and through the Clean Air Act. And it urges the U.S. to develop its capacity to generate electricity from clean, safe and renewable sources so existing coal-fired plants can be phased out without a net loss of jobs or compromising the nation's energy supply.

"These steps compromise a medically defensible energy policy: one that takes into account the public health impacts of coal while meeting our need for energy," PSR concludes.