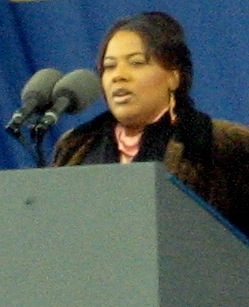 Bernice King made history when she became the first woman in the 52-year history of the Southern Christian Leadership Conference (SCLC) to take the organization's reins. Now she can make history in another way. She should renounce the anti-gay bigotry of her recent past. That bigotry was on shameful and insulting display in December 2004 when she and thousands of marchers stood at the gravesite of her father, Martin Luther King, Jr., and denounced gay marriage. The implication was that King might well have stood with her and them in their protest against gay rights.

Nothing could be further from the truth. Martin Luther King, Jr.'s fight against bigotry and discrimination, all bigotry and discrimination, was relentless and uncompromising. If anything that day, King would have been across the street from his gravesite with the hundred or so counter-demonstrators. They loudly shouted that what Bernice and the marchers were doing at her father's gravesite -- and in his name -- was a travesty and a disgrace. Bernice sullied her father's name to show her enmity to gay marriage. She also sullied her mother's name, too. A few years before Bernice's gravesite antic, Coretta Scott King issued a public statement forcefully denouncing anti-gay bigotry and made it perfectly clear that her husband would be a champion of gay rights if he were alive.

Bernice King is an outspoken evangelical, and she and other black evangelicals have marched, protested, written letters and circulated petitions denouncing gay marriage. This is her belief and she certainly has the right to express it. That is she has the right as a minister, evangelical, religious fundamentalist and private citizen.

Her anti-gay bias swims forcefully in the main current of conservative evangelical belief, thought, and expression. A significant number of blacks, and a majority of black evangelicals, like her also oppose gay marriage and even gay rights. They rail at the notion that the battle for gay marriage should in any way be called a civil rights fight. And certainly in King's day, gay rights were invisible on America's public policy radarscope, and homosexuality, among blacks and whites, was hushed up. There's not a word in any of his speeches or writings about homosexuality or whether he believed the civil rights struggle was inclusive of gays. That's only because it was not a visible and compelling issue of discrimination then. It is today. And Bernice King now heads up the organization -- with her father's name and stamp all over it  that was founded to fight against discrimination.

Martin Luther King, Jr., the ministers, and many of the thousands who fervently believed in and marched with him in support of the ideals of the SCLC would, without missing a beat, march against gay marriage bans, the hate crime murders, and assaults on gays. They would have cheered Congress for ending its years of stalls, dodges, and foot dragging to pass the Matthew Shepard/James Byrd Hate Crimes Bill. The bill adds gender, sexual orientation, and gender identity to existing hate crimes laws. President Barack Obama quickly signed it into law. King would have cheered loudly at its passage too. In fact, the SCLC leadership, pre-King's election as president, also lobbied for it and cheered its passage.

This is not revisionism or after-the-decades fact speculation. King refused to buckle to FBI and White House pressure, and pressure from conservatives inside SCLC to dump his chief aid and the architect of the March on Washington, Bayard Rustin, who was avowedly gay. It took courage to resist their efforts to oust Rustin. But King deeply believed that embodied in the civil rights cause was a person's right to be whom and what he was. King may have even praised his daughter for having the courage and conviction to march for her beliefs, but that would not have changed his unyielding belief that bigotry is still bigotry, whether it's based on race or sexual preference, and must be uncompromisingly opposed.

On its Web site, SCLC clearly says "its mission is to challenge all people of good will, of every persuasion, who believe in the principles espoused by Martin Luther King, Jr. to join us." Presumably, that's the mission of its new president. She can prove it is by publicly renouncing her anti-gay bigotry.

Earl Ofari Hutchinson is a political analyst and the author of the forthcoming book, "How Obama Governed: The Year of Crisis and Challenge" (Middle Passage Press).

(Photo of Bernice King by Mark Blacknell from Wikimedia Commons.)