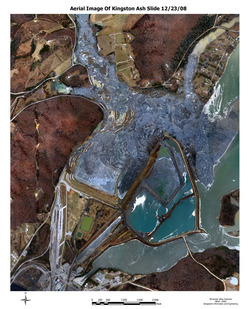 The disastrous coal ash spill that occurred a year ago at the Tennessee Valley Authority's Kingston power plant in eastern Tennessee dumped a whopping 2.66 million pounds of 10 toxic pollutants into the nearby Emory and Clinch rivers -- more than all the surface-water discharges from all U.S. power plants in 2007.

That's one of the findings of a new report from the nonprofit Environmental Integrity Project based on toxics release inventory data filed by TVA with the Environmental Protection Agency. The 10 pollutants are arsenic, barium, chromium, copper, lead, manganese, mercury, nickel, vanadium and zinc -- chemicals that have been linked to cancer, neurological disorders and other serious health problems.

The report's release came in time for the hearing scheduled for today by the House Subcommittee on Water Resources and the Environment on the progress of the ash spill's cleanup.

TVA operates coal ash ponds covering nearly 3,000 acres at its other plants in Alabama, Kentucky and Tennessee -- four of which the EPA rates as "high hazard," meaning a failure like the one at Kingston would likely kill people.

As noted in the EIP chart below, the Kingston spill released into the rivers 140,000 pounds of arsenic -- more than twice the amount discharged into waterways from all U.S. power plants in the previous year. A potent poison, arsenic has been linked to cancers of the skin, liver, bladder and lungs as well as to cardiovascular, skin and neurological problems. 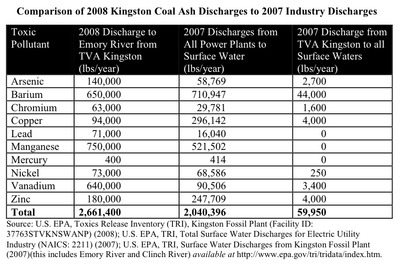 The spill also dumped into the Emory nearly 640,000 pounds of vanadium, which when ingested at relatively high levels by animals has been associated with kidney and liver damage as well as birth defects in offspring. Vanadium is among the pollutants in coal ash that can build up in the food chain.

The 2.66 million pounds of pollutants dumped into the Emory by the 2008 ash spill disaster is 45 times greater than the 59,000 pounds of those same pollutants the Kingston plant put into the river in 2007.

Schaeffer pointed out that much of the pollution released by the spill is bound up in the coal ash and thus not immediately absorbed by the ecosystem. Indeed, TVA's own sampling of the river water shows that pollution levels on the Emory do not currently exceed basic water quality standards. And some of the contamination will be removed by the dredging of the river bottom that's now underway -- part of a massive cleanup whose price tag has been estimated at $1 billion.

But Donna Lisenby, the Upper Watauga Riverkeeper with the North Carolina-based environmental group Appalachian Voices, pointed out during the press conference that this kind of dredging actually risks stirring up polluted sediment and re-contaminating the water. She said she would have preferred TVA do dry dredging by using cofferdams -- dry areas constructed in wet environments that are commonly used for building ships and repairing hydroelectric dams. However, TVA opted for wet dredging because it's cheaper.

Also addressing the press conference was hydrogeologist Charles Norris, who pointed to the long-term hazards from contaminated sediments on the river bottom. Rivers are recharged with groundwater, which now will flow through the polluted sediment before reaching the main water body. Over time, Norris said, the pollutants in the sediment will become more concentrated, eventually exceeding the levels in the spilled ash.

One of the concerns raised by Lisenby is that TVA has apparently tried to conceal information about the full extent of the disaster and the toxicity of coal ash. For example, she pointed to TVA spokesperson Anda Ray telling the CBS news show "60 Minutes" that constituents in coal ash are naturally occurring in soil and rock -- but not mentioning that they're much more concentrated in coal ash.

Lisenby also reported that in her trips along the impacted rivers in March and April, she found TVA's automated water sampler almost a mile downstream from where the dredging was actually occurring -- a distance she believes is probably too far to accurately capture whether re-contamination of the water is occurring.

EIP's report on the Kingston spill comes as the EPA is scheduled to release proposed rules for coal ash any day now.

"Let's hope these overdue regulations protect our waterways from these pollutants," Schaeffer said.