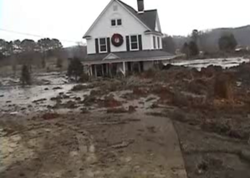 The public does not have access to information about more than 70 coal ash waste storage sites because the Environmental Protection Agency is withholding at the request of the power companies, which claim it represents "confidential business information."

Among the companies demanding that the information be kept secret are North Carolina-based Duke Energy and Southern Company subsidiaries Georgia Power and Alabama Power.

But the EPA may be forced to hand over the information thanks to an action taken this week by three environmental advocacy groups.

The Sierra Club, Earthjustice and the Environmental Integrity Project filed a complaint on Tuesday in federal district court under the Freedom of Information Act to get the withheld information from the EPA, arguing that it's vital to the health and safety of nearby residents.

"Most utilities have already provided EPA with exactly the same data that Duke, First Energy, and the Southern Company subsidiaries are trying to keep the public from seeing," says EIP Executive Director Eric Schaeffer. "Their attempts to hide the size of their ash ponds and other relevant information are absurd, and ought to be quickly rejected by EPA."

Demands by those three groups led the EPA to release data earlier this year showing there are almost twice as many coal ash dumps as previously identified. It also showed that the largest dumps tend to be the oldest and offer the least amount of protection.

These are facilities like the Tennessee Valley Authority impoundment that failed last December in Harriman, Tenn., dumping a billion gallons of toxic coal ash sludge onto a nearby community and into nearby rivers (photo above). That incident intensified calls to better oversee coal ash, which is not currently regulated by the federal government.

So far the EPA has identified 49 coal ash impoundments as "high hazard" sites, meaning that their failure could lead to a loss of human life. Coal ash also contains potentially dangerous levels of toxins including arsenic, lead and mercury that can leach out and contaminate nearby water supplies.

The groups' action comes as the EPA is expected to put forth a proposed regulation governing coal ash disposal. Agency officials said they would release the proposal this month.

"The public needs to have all the relevant information about the largest toxic waste ponds in the US -- not only to protect their communities -- but to participate meaningfully in the upcoming rulemaking," says Earthjustice Attorney Todd True.

(Photo above shows one of the homes in Harriman, Tenn. destroyed by last December's massive coal ash spill from an impoundment at the Tennessee Valley Authority's Kingston coal-fired power plant.)