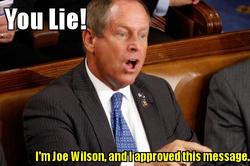 Thank you, dear readers, for another great year at Facing South!Just last November, after the heady days of the 2008 elections, FS made the jump from a rather homely little blog to the snappily-designed online magazine you see today.

Thanks to you, I think we can say the launch of Facing South online magazine has been a big success. Each month, thousands more of you joined us in our experiment in Southern-fried, non-profit, independent journalism. Since January, Facing South's monthly traffic has skyrocketed 134%.

What I'm most proud of, though, is that -- despite having only a tiny fraction of the resources bigger journalism outfits have at their disposal -- Facing South has been able to break big stories and deliver in-depth investigations that have made a real impact on the national debate.

What kind of stories? Without further fanfare, here's a sampling of 10 stories at Facing South that made a big splash in 2009. First installment:

10. WILL THE REAL JOE WILSON PLEASE STAND UP?

Or better yet ... just stay seated.

Rep. Joe Wilson's 15 minutes are over, but when the spirit moved the jumpy Republican from South Carolina to interrupt President Obama's health reform speech last September, everyone was wondering: Who is this guy -- and why is he doing this?

Facing South readers soon found out: First, we reported that Rep. Wilson is a darling of the health care industry with a special interest in derailing not just Obama's speeches but the entire reform agenda.

Then we documented Wilson's -- how shall we say it? -- checkered history in race relations: Not only was he one of only seven South Carolina state senators who voted to keep the Confederate battle flag flying at the statehouse; he defended his vote by saying "the Confederate heritage is very honorable." Another reason Wilson and Obama don't get along.

But Facing South took it one step further. We revealed that Rep. Wilson's outburst -- which came while Obama was talking about health care for immigrants -- was hardly surprise: Wilson has been at the center of the immigration debate for years.

South Carolina is ground zero for the nation's immigration wars: For two years now, that state has had the fastest rate of Latino population growth in the country.

In response, Wilson has emerged as one of the leading spokespersons for the right-wing, nativist anti-immigrant movement, pushing bills to declare English the country's official language (2008), make government services available only in English (2007), and report undocumented persons to the police if they try to use medical services (2004).

In other words: Rep. Wilson's moment in infamy may be up, but his outburst was just the tip of the iceberg for a movement and cultural battle in the South that's still very much with us.

Top 10 Stories of 2009 #1: The biggest eco-disaster you never heard about (unless you read Facing South)