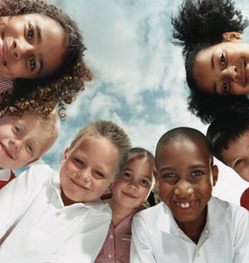 This March, census forms will be delivered to every residence in the United States asking 10 short questions that will help determine how billions of dollars in federal funds are spent for things including hospitals, schools and job training centers. The results will also determine the number of seats each state receives in the U.S. House of Representatives starting with the 2012 elections.

The importance of the decennial population tally raises concerns that some demographic groups will not be counted properly -- and one of the groups most at risk of being undercounted is children.

The numbers below come from "Why Are Young Children Missed So Often in the Census?," a report released last month by the Annie E. Casey Foundation that looks at the difficulties in counting children, especially minority children. Noting that there are a number of trends that suggest it will be even more difficult to get an accurate count of young children in 2010 than it was in 2000, author Dr. William P. O'Hare offers recommendations for steps that child advocates, the Census Bureau and other federal agencies can take to ensure young children are counted. To read the full report, click here.

Rank of children among the age groups most often missed in the Census: 1

Net undercount of children under age 10 in the 2000 Census: 1 million

Rank of minorities among those children missed most often: 1

Percentage rate at which non-black males in that age group were missed: 3.3

Percentage rate at which black females under age 5 were missed in 2000: 5.4

Percentage rate at which non-black females in that age group were missed: 3.8

Compared to the elderly, increased likelihood for children to live in hard-to-count areas: 50%

Percent of all children who live in hard-to-count areas: 20

Number of government programs serving families in need for which Census counts are used to calculate funding: more than 140

Amount of federal funding those programs distribute: more than $400 billion

Percentage points by which the U.S. population of children under age 5 is estimated to have risen since 2000: 6

Estimated increase from 2003 to 2006 in the number of children with at least one unauthorized-immigrant parent, which complicates counting: 1.6 million

Estimated number of children affected by the housing crisis, which also makes it more difficult to get an accurate population count: 2 million

CENSUS WATCH: In Louisiana, the Census gets a dose of Cajun pride