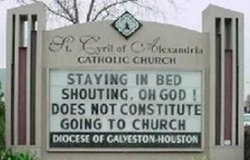 What makes people religious: How important faith is in their lives, or how often they actually attend services?

According to the Pew Forum on Religion and Public Life, there's a big difference between the two, even in Bible Belt states in the South.

Last month, Pew ranked all 50 states by their "religiousness," using four different measures (importance of religion to those being surveyed, worship attendance, frequency of prayer and belief in God).

Unsurprisingly, Southern states ranked high. In all 13* Southern states the Institute and Facing South follow, the people surveyed scored above the national average in each category.

But by using four different lenses on what it means to be "religious," the survey revealed some interesting discrepancies.

For example: The difference between the percentage of people who say "religion is very important in their lives" and those who "attend religious services at least once a week."

By my calculations, there's roughly a 20-point difference between the two in South. I compiled a chart that breaks it down by state: 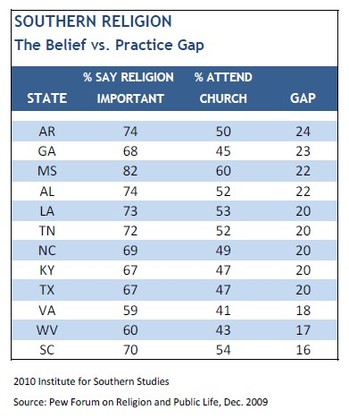 As you can see, the gap is largest in Arkansas and the smallest in South Carolina.

There are lots of reasons people who view themselves as "religious" might decide to skip going to services, ranging from frustration with a local minister/priest or sheer laziness, to broader reservations about the direction of their denomination or organized religion in general.

An interesting area for further study would be the impact this has on politics. These Protestant denominations are the driving force behind the religious right in the South, and the church itself is the organizing platform. Will this decline in the number of people who identify with these denominations -- and the large number of Southerners who don't attend church -- affect the ability of fundamentalists to mobilize come election time?

What the election means for immigration

How to expose a $40 million secret