Skip to main content
Join the voice for a changing South.
Donate Today
By Sue SturgisJanuary 27, 2010 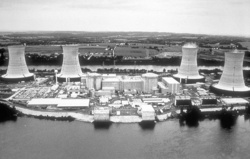 The generator from the unit at Pennsylvania's Three Mile Island nuclear power plant that suffered a meltdown in March 1979 has found a new home at a nuclear plant in North Carolina -- a move that's sparking concerns among nuclear industry watchdogs.

FirstEnergy, the Ohio-based company that owns TMI (pictured right), sold the Unit 2 generator to Siemens Power Generation, a division of the German conglomerate Siemens AG. Siemens in turn sold it to North Carolina-based Progress Energy, which plans to install the equipment at its Shearon Harris nuclear plant near Raleigh, N.C. to boost power capacity. Progress is selling the generator that's currently at the plant to Siemens for resale to the nuclear industry.

While the equipment from TMI reportedly is not contaminated with radioactivity -- it was on the non-nuclear side of the plant and isolated by block valves during the disaster -- the move is causing other worries.

For one thing, nuclear watchdogs in North Carolina have concerns about the purchase of aged equipment from the site of a huge industrial accident. A Progress Energy spokesperson told the Raleigh News & Observer that used parts for power plants, while hard to come by, are less costly.

"Harris' history is replete with examples of [cost-cutting] that have raised risk to the public," says Jim Warren, executive director of the Durham-based N.C. Waste Awareness and Reduction Network.

Those examples include failing to install fire-safety equipment that meets Nuclear Regulatory Commission requirements, employing a private security firm that encouraged armed guards to cheat on certification tests in order to keep from losing trained workers, and tolerating malfunctioning equipment in vital parts of the facility rather than conducting necessary maintenance.

Also raising concerns about the use of discount components in nuclear power plants are Joy Thompson and David Bear, health physics specialists hired to monitor radiation at TMI in the wake of the 1979 meltdown. The story about what they witnessed there -- and how it differs from the official account of the disaster -- was featured in Facing South's 2009 special TMI investigation.

They note that the reactor core at TMI-2 was itself a component bought on discount. General Public Utilities Corp., TMI's New Jersey-based builder, got what Thompson describes as a "heckuva deal" on it from Kerr-McGee, an Oklahoma-based company since acquired by Houston-based Anadarko Petroleum.

The TMI-2 core was originally made for another nuclear power plant, but that facility rejected it because of problems with the fuel-rod cladding welds, Thompson and Bear point out. That core eventually wound up at TMI, where they note that it was causing elevated radiation releases even before the meltdown began in March 1979.

"Buying up bargain-basement components sure didn't work out well for the generator's original home base," Thompson observes.

In Pennsylvania, meanwhile, the group Three Mile Island Alert (TMIA) has issues with where the money from the Unit 2 generator sale will go.

"We will be working with the [Office of Consumer Advocate] to make sure proceeds from the fire sale are returned to the rate payer or placed in the decommissioning [fund], which is grossly underfunded," says TMIA Executive Director Eric Epstein.

A 1995 ruling by the Pennsylvania Supreme Court allowed GPU -- since bought by FirstEnergy -- to charge rate payers for the TMI-2 disaster. Those same rate payers had already shelled out $700 million to build the unit, which was on line for only 90 days -- just 1/120th of its planned operating lifetime -- when the meltdown began. The rate payers have also footed a $1 billion bill to de-fuel Unit 2.

The generator's rotor and stator are scheduled to be sent to North Carolina in two separate shipments. The rotor, which weighs about 170 tons, will be shipped out next month, followed by the 460-ton stator in March.

(Photo of Three Mile Island nuclear power plant, with Unit 2 on the right, from the Centers for Disease Control and Prevention via Wikipedia.)