Skip to main content
Join the voice for a changing South.
Donate Today
By Sue SturgisFebruary 9, 2010 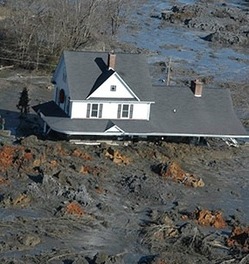 The U.S. Environmental Protection Agency has released action plans submitted by 22 coal-fired power plants to improve the safety of the massive dammed surface impoundments where they store toxic coal ash, but environmental advocates question whether the plans do enough to protect the public from disaster.

That's because in the absence of federal regulations treating coal ash as hazardous waste, the EPA lacks authority to strictly enforce the plans.

The utilities submitted the plans to EPA in response to the agency's on-site assessments of the impoundments, ordered after the catastrophic December 2008 collapse of a coal ash impoundment at the Tennessee Valley Authority's Kingston power plant in eastern Tennessee. The agency made the plans available to the public last week.

"EPA is committed to making communities across the country safer places to live," said Mathy Stanislaus, assistant administrator for EPA's Office of Solid Waste and Emergency Response. "The information we are releasing today shows that we continue to make progress in our efforts to prevent future coal ash spills."

The plans made public so far address recommendations for 43 impoundments at 22 plants, including 10 across the South. Altogether, the agency has identified 49 coal ash impoundments at 30 different plants as high-hazard, meaning that a failure would probably cause a loss of human life. Not all of the action plans submitted to date are for the highest-hazard facilities.

Attorney Lisa Evans, a coal ash specialist with the environmental law firm Earthjustice, praised EPA for sharing the companies' plans with the public. But she questioned whether these voluntary plans for shoring up the structures are adequate given the potential threat to communities.

"Where are the administrative orders to the facilities with enforceable time lines?" asked Evans. "Unless these things are formalized, enforceable and tracked by the agency, I don't think there's much use to them."

EPA stated that if facilities "fail to take sufficient measures, EPA will take additional action, if the circumstances warrant" -- but it does not specify what that action might be. Evans pointed out that unless coal ash is declared hazardous, there cannot be strict federal enforcement. And to date, the EPA has declined to designate coal ash as hazardous waste.

"We can't fault EPA for not issuing orders in lieu of accepting voluntary agreements, since the law is not there for them to enforce," Evans acknowledged. "This clearly illustrates an important gap that could have life-or-death consequences."

Since last May, EPA has been conducting on-site assessments of coal ash impoundments and similar waste storage facilities at electric utilities nationwide. It hired contractors with expertise in dam safety to assess all of the known units with a dam hazard potential rating of "high" or "significant" as reported by the electric utilities themselves (except for those owned by the federally overseen Tennessee Valley Authority, which are being evaluated on a separate schedule).

Evans also questioned the adequacy of the inspections, which were based on visual assessments of the sites, interviews with on-site personnel and reviews of technical reports and other documents where available. "No new core samples or really invasive and diagnostic testing was conducted," she said.

In some cases, the companies' vague plans to address serious problems seem to justify concerns about EPA's lack of enforcement authority. For example:

* The final inspection report [pdf] for Alabama Power/Southern Co.'s Plant Gorgas in Walker County, Ala. noted "minor" seepage at one location on the dam. In response, the company said it "intends to monitor this issue and take any measure as [it] may deem necessary to ensure the continued integrity of the structure," but it did not offer any specifics. Plant Gorgas is located on the Mulberry Branch of the Black Warrior River, which along with its tributaries is a major source of drinking water for cities including Tuscaloosa and Birmingham, Ala.

* The final inspection report [pdf] for Duke Energy's Allen plant in Gaston County, N.C. documented the presence of scarps -- large cracks cause by erosion -- near the crest of a dam as well as seepage, and recommended maintenance work to detect stability issues. In its action plan [pdf], the company said that the "scarps and seepage noted in this inspection report have been identified in previous inspections performed by independent engineering consultants" and that it "will continue to monitor these areas." The Allen plant sits on Lake Wylie, a man-made reservoir on the Catawba River, which was named the most endangered U.S. river in 2008 by American Rivers.

* Inspectors recommended [pdf] that the LG&E/E.ON US Trimble plant near Bedford, Ky. develop plans to establish a firm schedule for maintenance at its ash pond. But the company's action plan [pdf] said only that it is "currently considering development" of such plans. The plant is located on the Ohio River 50 miles northeast of Louisville, Ky.

* At Progress Energy's Cape Fear plant in Chatham County, N.C., inspectors found [pdf] an area of ponded water at the edge of one dike and recommended improving the grading or, if the area couldn't be fully drained, buttressing the structure. Progress Energy responded [pdf] that it needed to gain permission from an adjacent landowner to access the problem area and would make the necessary improvements "[p]roviding access is allowed." The plant sits alongside the Haw River, a tributary of the Cape Fear.

* Meanwhile, EPA is getting push-back on inspectors' recommendations for the impoundments at American Electric Power's Philip Sporn plant along the Ohio River in Mason County, W.Va. The company has indicated its willingness to conduct some stability studies, but said the recommended liquefaction tests -- another assessment of stability -- would not be necessary since the company has conducted generic liquefaction tests. However, EPA's inspector for the site continues to believe liquefaction studies should be conducted for the plant's two impoundments, which have been designated high-hazard facilities. On Nov. 13, 2009, EPA sent a letter to AEP requesting the tests, but there is no indication that the company will conduct them.

The EPA had promised to release proposed federal regulations for coal ash by the end of 2009, but in December said that it was delaying the release "due to the complexity of the analysis." The utility industry has been lobbying hard to keep coal ash from being designated as hazardous waste, even though the material contains potentially dangerous levels of toxins including arsenic, lead and mercury.

To see the action plans submitted by the utilities, click here and scroll down to the documents marked "New."

(Photo shows the aftermath of the December 2008 coal ash impoundment failure at the TVA's Kingston power plant in eastern Tennessee.)