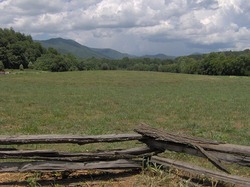 The Eastern Band of Cherokee Indians is fighting an electric substation that Duke Energy plans to build near Kituwah, the site of a sacred mound near the Tuckasegee River in western North Carolina. Kituwah (in photo) is considered the Cherokee mother town, believed to have been inhabited for nearly 10,000 years and long used as a center for religious rituals.

A discussion of the substation project is scheduled to be on the agenda at tonight's meeting of the Swain County Commission in Bryson City, N.C. On February 4, the Eastern Band of Cherokee Indians Tribal Council passed a resolution formally opposing the project, which will disrupt the view of the mountains surrounding the sacred site. The substation would be only about 200 yards from Kituwah.

"The impact of construction of the substation or tie station was never open to scrutiny by any of the interested parties including the tribe, Swain County government or Swain County residents, and secondly, the impact of the substation would adversely impact the Cherokee sacred site traditionally known as Kituwah also referred to as Ferguson Field," according to the EBCI resolution.

Long used by white settlers as farm land, the 300-acre site was purchased by the Eastern Band of Cherokees for $3.5 million in 1996 in order to preserve the mound. About 170 feet in diameter and only about 5 feet tall, the mound was once a larger structure that served as a foundation of a building that housed the sacred flame of the Cherokee. It's located about nine miles outside of the Eastern Cherokee reservation.

In an e-mail sent last month to a Duke Energy official summarizing their discussion about the project, Hannah Smith, the assistant attorney general of the Cherokee reservation, explained the site's significance and the impact of the construction:


While I understand the need for power and know that change is by-product of progress, I explained my desire to have Duke Power mitigate as much as possible the visual impact this tower structure is going to have on the experience Cherokee people have when they visit Kituwah. I used a metaphor to describe the impact on this ancient view shed of Kituwah in hopes that it might convey a better understanding of how I (and most Cherokees) are going to be affected. I said that erecting this unattractive industrial looking "eye sore" so close in proximity to our ancient and sacred Mothertown was like putting up a power substation next door to a great Cathedral (like St. Peter's Basilica in Rome). The Cherokee culture values the Kituwah site and what is left of its unspoiled beauty like most of the world values St. Peter's for its iconic beauty and ancient place of worship.

There are so few ancient Cherokee ceremonial grounds that aren't largely spoiled by "progress" and it saddens me to know that perhaps the most important one of all, Kituwah, is falling victim to progress as well. A Cherokee sister from Oklahoma recently came to Kituwah for celebration and worship and she cried when she looked around for the first time and saw how the mountains encircled our Mothertown. She cried because it looked like what she had been seeing in her mind's eye based on the descriptions made to her by her elders when speaking of our sacred Mothertown.

EBCI Principal Chief Michell Hicks told the Cherokee Phoenix newspaper that the tribe has a good relationship with Duke Energy and believes a solution can be reached.

Duke Energy's substation is the latest in a series of threats to sacred Indian sites in the Southeast. Last year a mound near Oxford, Ala. was used as fill dirt for the construction of a Sam's Club, and another Indian mound in the Oxford area was recently found to have disappeared during construction of a municipal sports complex.

In the late 1990s, an Indian burial site in Nashville, Tenn. was demolished to build a Wal-Mart Supercenter, while another Indian burial site along the Cumberland River in that city was disturbed during construction of a stadium for the Tennessee Titans National Football League team. And Georgia is building a four-lane highway near the Ocmulgee National Monument, a site of great significance to the Muscogee (Creek) people.

For more information about what's happening at the Kituwah site in North Carolina, visit the Save Kituwah page on Facebook.

(The Kituwah Mound is the slight rise in the center field in the photo by Brian Stansberry via Wikimedia Commons.)

Hope for threatened sacred Indian sites in the Southeast?

Is there a new Wal-Mart going in near you?