This photo of the Alabama landfill and those below are by Hurricane Creekkeeper John Wathen. To see more of his photos, including aerial shots of the landfill operation taken in a flyover provided courtesy of SouthWings, click here.

The Arrowhead Landfill -- owned by Perry County Associates and managed by Phill-Con Services and Phillips & Jordan -- is near Uniontown, Ala., a community in rural Perry County where 88% of residents are African-American and almost half live in poverty. The landfill sits only 100 feet from some people's front porches.

"Why is Perry County being treated like this?" asks Hurricane Creekkeeper John Wathen, who wants the ash shipments stopped until the problems are fixed. "Are the people in Perry County any less valuable than the people of Kingston, Tenn.?"

Last July, the EPA approved TVA's plan to ship by train to the Perry County dump more than half of the 1 billion gallons of coal ash that spilled from TVA's Kingston plant in eastern Tennessee's Roane County in December 2008. EPA assured the public that the Alabama landfill "complies with all technical requirements specified by federal and state regulations," but what Wathen has documented calls that into question.

After months of investigating local residents' complaints of unusual runoff and sickening smells and getting no help from state or EPA regional regulators, Wathen sent a complaint to EPA Administrator Lisa Jackson yesterday documenting serious environmental health threats at the 976-acre facility:

* Dangerously high arsenic levels have been found in what's described as "stinking gray/tannish waste" being pumped nightly from the landfill. Tests of the leachate collected by Wathen from one of the on-site pumps indicated the presence of arsenic -- a contaminant characteristic of coal ash and a known carcinogen -- at 0.840mg/L. That's more than 80 times the U.S. safe drinking water standard of 0.01 mg/L and far higher than what's considered safe for aquatic life. Wathen took his findings to the Alabama Department of Environmental Management, but ADEM reportedly declined to investigate after the landfill manager denied the pumping claims. "No tests, no samples, no interviews of employees or nearby residents [affected]," says Wathen's complaint, "just a simple denial by the manager was good enough to refute hundreds of photos, certified lab results, [anecdotal] stories from the community, or first hand eye witness account[s] by me."

* The arsenic-tainted waste runs in the landfill's roadside ditches at levels that have exceeded safe drinking water limits. "While people do not drink from the ditch, it leads through private land where farm animals do drink from the surface water," Wathen says. The ditches (photo above) also drain into local streams. ADEM has attributed the material in the ditches to the chalky local soils used to build the haul road, but Wathen says the agency has failed to produce any evidence to back up that claim. Perry County is not among the areas of the U.S. where dramatically elevated levels of arsenic have been found to occur naturally in groundwater due to high levels in soils. 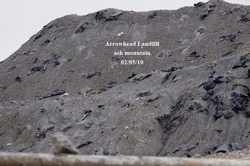 * An excessive amount of wet material is being dumped into the landfill, threatening the protective liner. The mixture of spilled coal ash and and other hazardous waste being dumped into the landfill is now piled about 60 feet high in places, with the wet conditions adding to the crushing weight. "The liquid levels actually stand well above the top of the liner and the high water levels seem to be consistent regardless of rain," Wathen writes. "It is my understanding the landfill allows a maximum permissible liquid level of only 18 inches above the bottom of the liner. There looks to be at least 20 feet of water standing in existing cells." Compounding the problem, the company that had been taking waste liquids from the landfill announced earlier this month that it would no longer accept the shipments, which it had planned to treat before sending through the Mobile public sewer system. Wathen had counted as many as 20 tanker trucks -- each carrying as much as 9,000 gallons of leachate -- leaving the site each day. 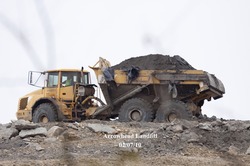 * Contaminated coal ash is falling from overloaded, uncovered trucks and spilling along the road. "This means that the haul road itself is now contaminated and all storm water leaving the haul road should be treated as potentially toxic," writes Walthen. Untreated runoff from the road now flows into nearby Tayloe Creek -- and when the rain subsides and the weather dries out, the concern is that all the mud will turn into airborne dust.

* When the train cars hauling coal ash to the landfill are washed off, the runoff is allowed to flow into Tayloe Creek's drainage basin. While the landfill operator erected silt fences at the site recently, they were standing under several feet of sludge during Wathen's two inspections earlier this month. And at the point where the site drains into the creek, the operator has constructed a dam of riprap, essentially using the waterway as a treatment facility -- something that Wathen notes is prohibited by both EPA and Army Corps of Engineers regulations.

"According to the agreement with EPA and TVA, no ash can be shipped to any landfill that does not meet compliance standards," Wathen writes in the complaint. "We therefore respectfully request that EPA order a complete stopping of disaster ash to Perry County until this landfill is in complete compliance as certified by EPA national headquarters. EPA Region 4 and ADEM have failed us."

In the meantime, Florida attorney David Ludder has announced that he plans to sue the landfill's operators on behalf of 155 local residents over the foul smell coming from the facility. He had previously announced plans to sue the facility's owners, but they filed for bankruptcy last month -- a move that prevents any new lawsuits from being filed against them until the bankruptcy is settled.