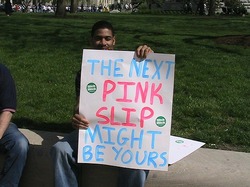 This week marked one year since Congress passed the American Recovery and Reinvestment Act, legislation crafted by the Obama administration to address the nation's ongoing economic crisis. Here's a look at the bill's achievements and failings by the numbers. Click on the figure to go to the original source.

Number of jobs created by the American Recovery and Reinvestment Act to date: 1.6 million to 1.8 million

Estimated number of jobs ARRA will create altogether: about 2.5 million

Percentage of working Americans who got a tax cut under ARRA: 95

Number of transportation construction projects funded by the bill: 12,500

Number of housing units that have been rehabbed or developed as part of federal recovery efforts: 143,422

Growth in GDP in the last quarter of 2009, which Moody's chief economist and former McCain economic advisor Mark Zandi attributed to ARRA: 5.7%

Number of Republican lawmakers who voted against ARRA but later touted its successes: 110

Date on which Rep. Jack Kingston (R-Ga.) railed against ARRA, shouting "Where's the stimulus package?" on the House floor: 7/28/2009

Date on which Kingston's office sent out press releases bragging that he had secured hundreds of thousands of stimulus dollars for more police officers in his district: 7/28/2009

The true unemployment rate, including those who have quit looking for work: 17%

Unemployment rate for individuals earning more than $150,000 a year: 3%

Unemployment rate for those in the lowest income tier: 31%

INSTITUTE INDEX: Momentum builds in the Fight for $15