Skip to main content
Join the voice for a changing South.
Donate Today
By ProPublicaFebruary 13, 2010 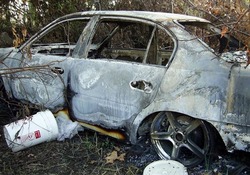 A rookie New Orleans police officer who had been on the force for just a year is under investigation in the shooting of Henry Glover outside an Algiers strip mall four days after Hurricane Katrina, the first act in a bizarre chain of events that has led to a massive federal probe into the city's Police Department.

Glover's burned remains were found weeks after the August 2005 storm inside an abandoned, nearly incinerated car on the Algiers levee

During the past year, the U.S. Department of Justice has interviewed scores of officers in an effort to determine how the 31-year-old Glover died, as well as whether officers may have tried to cover up his death.

William Tanner, an Algiers man, has described his effort to get medical treatment from police for Glover's gunshot wound. Tanner has alleged that a group of officers from the SWAT unit detained and beat him and two other men, refused medical care for Glover, and eventually drove off in Tanner's car, with Glover's body inside.

But it was never known who had shot Glover. Now, several sources and a defense attorney confirm that federal investigators believe that then-NOPD officer David Warren shot Glover.

It's unclear if Warren's bullet killed Glover. It's also unclear whether another group of officers under investigation for setting the car on fire--including two leaders of the NOPD's high-profile SWAT unit, Capt. Jeff Winn and Lt. Dwayne Scheuermann--knew that Glover had been possibly shot by a fellow cop.

What is clear is that the shooting was the first in a string of questionable actions by NOPD officers now at the center of a sprawling probe.

Rookie reassigned in days after Katrina

Warren, 47, was a rookie on the force assigned to the 7th District in eastern New Orleans when the storm struck. He was unable to get to his post and was directed to the 4th District in Algiers, according to his attorney, Joseph Albe.

On Friday, Sept. 2, 2005--four days into the flood--Warren and his patrol partner encountered two men behind a Chuck E. Cheese's restaurant near the intersection of Seine Drive and Texas Drive, Albe said.

Glover was at that location that afternoon with a friend when he was shot, according to family members.

Warren, in uniform, saw two men ge out of a truck and "charge" toward a business, Albe said. Warren believed they were going to loot the business.

Warren, an expert marksman, pulled the trigger on his rifle. A shot rang out.

"After he fired, the guys turned around and ran off," Albe said.

Warren, who Albe said doesn't know exactly where the bullet landed, then called ranking officers and reported the shooting.

"He did exactly what he was supposed to have done," Albe said.

Though the location, the date, time and circumstances square with civilian accounts, Albe maintains there is no evidence that shows Warren shot Glover.

"Did David Warren shoot his gun? Yes. He shot one shot. Do we know whether it was Henry Glover? No ... We may never know."

Warren never wrote a report on the shooting incident.

"He was told not to" by ranking officers, Albe said. "Plus, an officer involved in a shooting doesn't write his own report."

A report written more than a week after the incident classified the shooting as a "miscellaneous incident," a designation given to minor matters that typically receive no follow-up, the attorney said.

Albe and other attorneys representing the officers under investigation have said the chaotic circumstances after Katrina need to be taken into consideration when judging officers' actions.

"It wasn't 'protect and serve,'" Albe said Friday. "It was protect themselves. It was a question of survival."

Warren is no longer with the NOPD. He joined the department as a recruit in December 2003 and was sworn in as an officer in May 2004. He left the force in 2008, according to civil service records.

He was an unconventional rookie: He joined the force mid-career and holds several degrees, including a master's of business administration degree from the University of Wisconsin, according to his personnel file.

His resume also states he has worked in the armed services, and participated in "use of force and threat assessment" training at the Lethal Force Institute Inc. At the NOPD's graduation for his recruit class, Warren was honored with a precision shooting award for having the highest cumulative score during firearms training.

Civilian witnesses have already given their version of the events of Sept 2, 2005, to federal agents.

Glover's fiancee, Rolanda Short, said last fall that Glover had gone out that morning to scavenge for supplies. After Katrina, with no stores open, he had been in charge of getting food, water and charcoal for the couple's extended family, several of whom lived near their apartment on Garden Oaks Drive, she said.

Short heard someone in the street shout out that Glover, who was known as "Ace," had been shot. Short said the man on the street indicated a police officer--maybe a state trooper--had shot the father of her young daughter.

Hearing the news, Short ran out into the street and saw Glover lying face down on the pavement with blood pouring from his chest. Short said as she held Glover's hand, a car pulled up and two police officers got out. They ordered Short to back away from her fiance, but she refused. Eventually they left, said Short, who was interviewed by FBI agents last year.

At that point, a potential savior appeared, Short recalled. Tanner, a maintenance man on a quest for gasoline for his car, stopped his white Chevrolet Malibu at the behest of Glover's brother, Edward King. Though he didn't know Glover, Tanner agreed to try to help.

A search for help

Tanner decided that driving several miles to West Jefferson Medical Center, the original plan, was a bad idea. With Glover in the car's back seat, and the injured man's brother and another man in the car, Tanner drove to a nearby school where the NOPD's SWAT unit had set up camp during the storm.

Instead of helping them, Tanner alleges that SWAT team members at Paul B. Habans Elementary School handcuffed the three uninjured men, interrogating them about what they were doing.

The officers jumped to the conclusion that the men were looters, and beat them, with officers kicking Tanner in the ribs, and one officer hitting him in the head with the butt of a gun, Tanner said.

Officers did not tend to Glover, who lay wounded--or possibly dead--in the back seat of the car, Tanner said.

At one point, an officer in a tactical uniform took Tanner's key chain, removed the key to his car and headed toward his Malibu, with flares sticking out of the front pocket of his cargo pants, Tanner recalled. The officer took off in the car, following other officers who were in a white truck, he said. Glover was still in the back seat of the car.

Eventually, Tanner and the other men were released. They fled the city.

Soldiers from the Army's 82nd Airborne recovered Glover's remains, mostly scorched bone fragments with "minute fragments of metal," from inside Tanner's charred car, which had been left beside the levee near Patterson Drive and Gen. Collins Avenue. The site was blocks away from the NOPD's 4th District station and a U.S. Border Patrol office, about a mile and a half away from the elementary school where SWAT encamped.

Coroner Frank Minyard said DNA from family members helped confirm Glover's identity. The autopsy shows Minyard did not classify the death as a homicide or flag it for police investigation.

Minyard's inaction in classifying the death a homicide is one reason police didn't begin an investigation, Albe said.

Six days after Glover's shooting, a pair of volunteer first responders from the Pittsburgh area, armed with a video camera, stumbled upon the vehicle. The two men videotaped what they found inside: a skull with two holes in it, according to a Pittsburgh television news report.

The skull went missing sometime between the pair's discovery and when the 82nd Airborne recovered the remains. No skull is mentioned in Glover's autopsy, which consisted of an examination of five biohazard bags containing bones and clumps of flesh.

Tanner learned about the location of his vehicle months after the storm from an agent with the federal Immigration Customs and Enforcement agency. The car remained on the levee through early February 2009. A neighbor said it was towed away by an NOPD truck a month later.

Although Tanner made several appeals to the NOPD in the time since Katrina to find out what happened to his car, he never got anywhere.

Two veteran officers, both highly decorated, are under investigation by federal authorities for playing possible roles in the disposal of Glover's body. Winn and Scheuermann of the SWAT team are two targets of the investigation, Eric Hessler, an attorney representing Winn, has previously said.

Winn, a Marine Corps veteran who served in Iraq, and Scheuermann are widely respected in the department. They have worked in the some of the NOPD's most proactive and dangerous units, volunteering for harrowing assignments time and again. The SWAT team responded to numerous reports of violence in the city immediately after the storm.

Hessler has defended his client in interviews, saying Winn and the officers he commanded were the ones who stepped up during the chaos after Katrina.

"Jeff Winn addressed everything properly by the guidelines the NOPD was working under during Katrina," Hessler said Friday. "By all accounts, he did a great job."

Tanner's account of what happened to Glover first appeared in a 2008 article published in The Nation magazine and on the Web site of ProPublica, an investigative newsroom. Despite repeated inquiries by Tanner about what happened to his car, the New Orleans Police Department had not previously opened an investigation into Glover's death or the incineration of his corpse.

The story prompted a federal inquiry. Since then, dozens of officers, including the current and former superintendents, as well as other top brass, have appeared before a federal grand jury. The U.S. Department of Justice, working with the local FBI office and the U.S. attorney's office, has issued countless subpoenas to the NOPD, and interviewed several officers.

The federal investigation into Glover's death is one of several active probes into the NOPD. A grand jury examining the well-publicized Danziger Bridge shooting--in which two men were killed by police and four others were shot--commenced last spring. The FBI also has an open investigation into the fatal police shooting death of Adolph Grimes III, 22, who was killed in an encounter with officers on New Year's Day 2009.

(For additional documents about this case, visit ProPublica's website.)

After Katrina, New Orleans cops were told they could shoot looters