Skip to main content
Join the voice for a changing South.
Donate Today
By Chris KrommFebruary 23, 2010
As I wrote last week, Barack Obama is a popular president -- just not in the South, a region where his extremely low approval ratings, especially among Southern whites, pull down the national averages.

In fact, while Obama's ratings have largely stayed positive in every other part of the country, in the South they nosedived as early as March 2009, suggesting Southern whites never really gave Obama much of a chance.

That broad snapshot is interesting, but you might be thinking: The South is a diverse and changing region. What about a state like North Carolina -- a place considered more politically moderate than, say, Alabama, and a Southern state Obama eked out victory in 2008?

To investigate, I looked at the state-level survey data put out by Public Policy Polling, our reputable local pollsters. Every month, PPP has polled Obama's approval ratings in North Carolina including break-downs for race.

Tracking his net approval ratings (those who "approve" minus those who "disapprove"), here's how the trend lines look for black and white* North Carolinians from January 2009 until now: 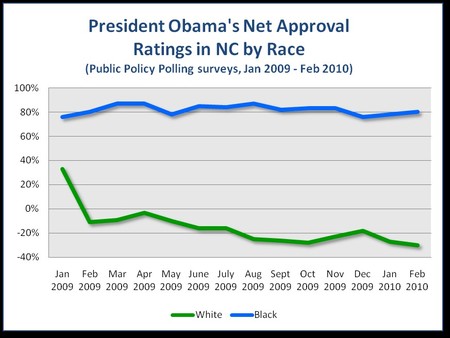 The N.C. polling data tells us some striking things:

* N.C. WHITES GAVE UP ON OBAMA QUICKLY: As in the overall South poll, in the beginning many white North Carolinians signaled to pollsters they'd give Obama the benefit of the doubt: In January 2009, 61% approved of the Obama transition. But by February, all bets were off: Obama's net approval went into negative territory among N.C. whites, and has continued to steadily sink ever since.

* BLACK SUPPORT HAS REMAINED SOLID: Mirroring national polls, the support for Obama among African Americans in N.C. has been strong and unwavering: Net approval has rested around 80% ever since Obama came into office.

* A GROWING RACIAL DIVIDE: The result of these two trend lines is a growing chasm between blacks and whites in North Carolina (as in the South generally) about Obama. In January 2009, the white/black gap over approval of Obama's transition was 43 points. By last summer, the approval ratings divide ballooned to an over 100-point difference between how blacks and whites in N.C. perceive the Obama presidency. It now stands at 110 points.

So much for that "post-racial" future.

* NOTE: Given the growing racial/ethnic diversity in N.C. and the South, I would have liked to have seen results for Hispanics/Latinos, Asians and other groups. Public Policy Polling did include an "other" racial category in their state polls, but the sample ended up being too small for the results to be reliable (average margin of error over +/- 20).

A national PPP poll this month [PDF] found 76% of self-identified Hispanics approved of Obama's performance (net approval: +62). Even if the figure is slightly lower in N.C. and Southern states, it still supports the idea that whites in general -- and Southern whites in particular -- are what's been dragging Obama's poll numbers down.