Skip to main content
Join the voice for a changing South.
Donate Today
By Sue SturgisMarch 10, 2010 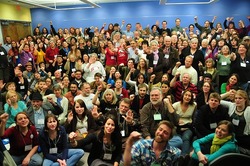 More than 200 citizen lobbyists from across the nation gathered in Washington, D.C. this week to urge Congress to pass legislation curbing mountaintop removal. This especially destructive form of coal mining involves blasting off the tops of Appalachian mountains and dumping the waste into headwater streams below, a practice known as "valley fills."

The activists taking part in Alliance for Appalachia's fifth annual End Mountaintop Removal Week are pressing for passage of two bills -- the Clean Water Protection Act (H.R. 1310) and the Appalachia Restoration Act (S.696) -- that would reinstate a long-standing regulation under the federal Clean Water Act prohibiting industries from burying streams and other waterways under waste.

Mountaintop removal mining became widely used across Appalachia in the 1970s as a cheaper and less labor-intensive way of extracting coal than traditional underground mining. Today the practice is most common in West Virginia and eastern Kentucky, with utilities in North Carolina and Georgia the nation's top consumers of mountaintop removal coal.

The citizen lobbyists heard presentations from a number of activists working to end mountaintop removal. They included Mickey McCoy with Kentuckians for the Commonwealth, who said:


"They have a lot of soft words for what they're doing. Like 'pond' for slurry. We're talkin' 72 acres! That's a lake. And 'spill.' 'Spill' is what happens when your son reaches over the table and spills his sister's milk. These are floods. Even mountaintop removal doesn't sound too bad if you say it real fast. They should really be calling it 'mountain bombing.'"

The D.C. gathering comes as the Obama administration -- which has promised to take "unprecedented steps" to curb damages from mountaintop removal -- announced that it was delaying the release of guidelines for mining companies seeking valley-fill permits. Originally scheduled for release this week, the guidelines are reportedly going to come out next week, the Charleston Gazette reports.

In a question-and-answer session following a speech she delivered on Monday at the National Press Club, EPA Administrator Lisa Jackson noted that while her agency does not have the authority to regulate mining practices, it does have authority over how those practices affect water quality.

Here's a video from iLoveMountains.org with more information about this week's action:

VOICES: They're still blowing up our mountains