Skip to main content
Join the voice for a changing South.
Donate Today
By Sue SturgisMarch 5, 2010 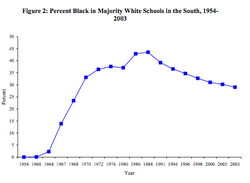 Year in which Wake County, N.C. instituted an anti-segregation diversity policy that assigned students by economics rather than race: 2000

Year in which Wake County voters elected a new Republican-backed school board majority that opposes the diversity policy: 2009

Percentage of the county's voters that took part in that election: 4.5

Date on which the school board took its first formal vote to scrap the diversity policy and return to neighborhood schools: 3/2/2010

Date on which the board voted to hire the conservative, pro-voucher Civitas Institute of Raleigh to provide its members' training: 3/2/2010

Rank of Art Pope -- primary Civitas benefactor and director of Americans for Prosperity, the group behind the Tea Party anti-tax protests -- among individual contributors to the anti-diversity candidates' campaigns: 2

Rank of Robert Luddy, current chair of Civitas and operator of a chain of private and charter schools: 1

Year in which Luddy founded Thales Academy, a chain of private K-8 schools in Wake County: 2007

Year in which the chain opened an academy in Apex, N.C., with current Wake School Board Chair Ron Margiotta serving as a trustee: 2008

Year in which Luddy plans to open a new Thales Academy location in Raleigh on a site his company recently acquired: 2012

Size of the tax credit for private-school students that Luddy advocated in an op-ed titled "Encouraging alternatives to Wake County schools": $2,500

Year in which Luddy won the first-ever entrepreneurship award given by the Ludwig von Mises Institute, an economic think-tank based in Alabama that promotes doing away with the public school system: 2006

Percentage of black students in majority-white schools in the South in 1954, when the Supreme Court outlawed segregation: .001

Year in which the Education Trust published a report finding that public schools serving the most economically disadvantaged students within individual districts are typically underfunded: 2006

Date when the Wake County school board is scheduled to take a final vote to end the diversity policy: 3/23/2010

(Click on the figure to go to the original source. The chart is from "Racial Transformation and the Changing Nature of Segregation," by Gary Orfield and Chungmei Lee, The UCLA Civil Rights Project, 2006.)

INSTITUTE INDEX: The harsh treatment of black girls in the South's public schools

The fight against school re-segregation heats up in North Carolina