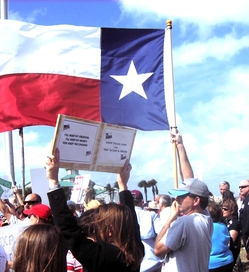 It's been about a year since the Tea Party phenomenon erupted on the political scene, primed by right-wing pundit anger and becoming a household word after they pulled off Tax Day protests last April in over 300 cities.

This week, the Tea cause got its first big political test in Texas: In a state that's proved fertile ground for conservative protests, several Tea-aligned candidates threw their hats into the ring to challenge Republicans across the state in Tuesday's primaries.

So what happened in Texas? And does it tell us about the state of Tea Party politics in America?

And going by pure win/loss percentage, Texas Tea partiers may have little to celebrate. They can claim at most three victories: Roy Morales, who won the GOP nod for the 29th Congressional district, centered around Houston; Don Summers, who bumped off the incumbent Harris County tax assessor/collector; and David Simpson, who took out State Rep. Tommy Merrit of Longview.

But the most interesting and indicative campaign was that of Debra Medina, the Tea-favored candidate for governor. As the AP notes, she was hardly the ideal candidate: short on money, low on name recognition in a race challenging an incumbent governor and sitting U.S. Senator. Medina even lost Tea Party votes for saying the U.S. government may have been involved in 9/11.

Medina ended up winning 18.5% of the Republican primary vote, which you can view one of two ways.

The positive spin: Given all the negatives Medina's campaign faced, for an upstart protest candidate to get nearly one out of five GOP votes was a major accomplishment. It's close to the 20% threshold one Texas political observer said would allow Tea partiers to declare success.

On the other hand, at a time when anti-incumbent sentiment is at a rolling boil, it says something that Medina didn't win a single Texas county -- not even her current home of Wharton County, where she became GOP chair in 2004, or Bee County, where she was born and raised. And if Medina could only get 18.5% among Republicans in the primary, how bad would she do in a general election?

In many ways, Medina is a good barometer for how the Tea Party is doing nationally. Not yet a full-blown movement or a well-organized political force, Tea partying remains an appealing attitude and powerful political current for discontented conservatives. And as Texas shows, it can be channeled in different -- and even conflicting -- directions.

But winning isn't everything -- especially this early in the game. The Tea Party has already scored a big success in Texas and elsewhere by moving the entire political debate to the right. Medina's dark horse campaign forced her competitors, especially a desperate Sen. Hutchison, embrace increasingly conservative positions.

Whatever the election returns, Tea partiers continue to have a big impact on public attitudes. In a recent poll in Tennessee, 9% of the general population -- not just Republicans -- said they were "active" in the Tea Party effort, and 29% had a favorable view of it.

They also remain a political player, as the state GOP in South Carolina -- one of the safer states to be a Republican -- has learned in a series of widely-publicized negotiations to keep Tea Party activists in the party fold.

There's are two final reasons why the Tea Party cause will continue to exert influence far beyond its numbers: visibility and money.

Thanks to TV and radio personalities like Rush Limbaugh (20+ million listeners) and Glenn Beck (3+ million TV audience, 9+ million radio), Tea Party activists will always have a champion and voice (unlike protesters and political challengers on the left).

As for money, let's just say that the handful of men who dumped 342 chests of tea into the Boston Harbor in 1773 likely didn't have the backing of a corporate front group like Americans for Prosperity (2006 income: $4.2 million).

Whatever the surface-level conflicts between the rough-edged Tea partiers in their smoother conservative cousins, as long as they have a big media megaphone and a basic commitment to protecting the interests of the wealthy, they'll remain a political force to be reckoned with.