Skip to main content
Join the voice for a changing South.
Donate Today
By Chris KrommMarch 3, 2010
Late yesterday, Kentucky Republican Sen. Jim Bunning relented on a multi-day filibuster that was holding up passage of a bill including a 30-day extension on unemployment benefits.

Bunning's retreat allowed the bill to reach the Senate floor, where it quickly passed 78-19 and was signed into law by President Obama last night (the House had passed a similar measure last week).

The Kentucky senator's intransigence may turn out to be a political blunder, just at a time when the GOP was gaining political momentum. Fellow Republican Sen. Susan Collins of Maine criticized Bunning's move, saying over 500 jobless would lose benefits in the next week in her home state.

It's also unlikely to endear Bunning and Republicans in states hard-hit by the recession and facing high unemployment.

Of the 19 Senators who voted against the package including jobless benefits after the filibuster ended, eight of them come from states that face jobless rates higher than the national average -- all but one of them (Sen. Ensign of Nevada) from the South. 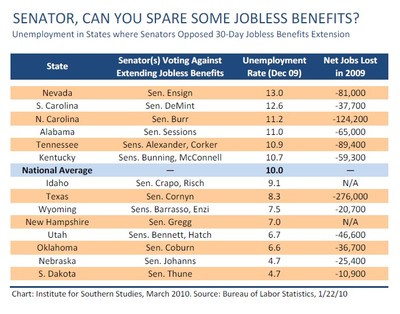 As the chart shows, Republicans in the South who voted against the bill are especially vulnerable to charges that they're putting politics ahead of the interests of their own recession-rocked constituents.

These are the kind of votes that could prove costly for Republicans where they face challengers in 2010, including North Carolina, Kentucky and New Hampshire.

It could even be an issue in states like Texas, where -- despite having an unemployment rate below the national average -- over a quarter million residents lost jobs in 2009. But ironically, the vote was cast by Sen. Kay Bailey Hutchison, who on the same day lost in her primary bid defend her senate seat.

Who are the 6 Democratic senators poised to kill student loan reform?