Skip to main content
Join the voice for a changing South.
Donate Today
By Sue SturgisMarch 24, 2010 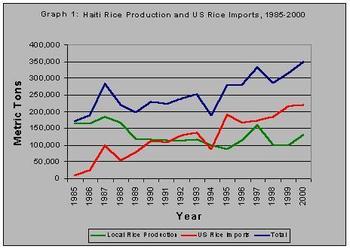 As in so many countries throughout the world, an important staple of the Haitian diet is rice, first brought by slaves from West Africa and cultivated on the Caribbean island nation for hundreds of years.

Until the mid-1980s, Haiti produced enough rice for domestic consumption -- but that changed after U.S. President Bill Clinton took office.

A champion of trade liberalization policies, Clinton pressed impoverished Haiti to cut tariffs on rice imported from the United States. Much of the U.S. rice that flooded Haiti as a result -- known by Haitians as "Miami rice" for the city where the shipments come from -- is produced by Riceland Foods, a farmer-owned agricultural marketing cooperative based in Clinton's home state of Arkansas.

The world's largest miller and marketer of rice, Riceland -- whose members include some 9,000 farmers in Arkansas, Louisiana, Mississippi, Missouri and Texas -- enjoyed sales of $1.3 billion in the last fiscal year. It's also a major beneficiary of taxpayer support, as the recipient of more than $500 million in agricultural subsidies between 1995 and 2006.

What's been good for Riceland and U.S. rice farmers has not been so good for Haiti, though. With its market flooded by U.S. rice, Haiti's domestic rice production has dropped dramatically. That's made the country dependent on other nations for food and driven farmers out of the countryside and into the crowded cities that proved so vulnerable in January's earthquake.

Since the disaster, imported rice prices have climbed 25% and would probably be even higher if not for all the food aid, the Associated Press reports.

But it appears change may be coming. President Clinton -- now serving as the United Nations special envoy to Haiti and helping lead U.S. fundraising efforts in the wake of the devastating January earthquake -- acknowledged during a hearing of the Senate Foreign Relations Committee earlier this month that the trade policy he promoted has failed the Haitian people:

It may have been good for some of my farmers in Arkansas, but it has not worked. It was a mistake. I had to live every day with the consequences of the loss of capacity to produce a rice crop in Haiti to feed those people because of what I did ... .

Agricultural trade policy is expected to be a topic of discussion at a U.N. Haiti donors' conference set for next week in New York. The Haitian government is seeking $722 million for agriculture, including an estimated $31 million for quake-related damage to its agricultural sector, part of an overall aid request of $11.5 billion, according to the AP:

"A combination of food aid, but also cheap imports have ... resulted in a lack of investment in Haitian farming, and that has to be reversed," U.N. humanitarian chief John Holmes told The Associated Press. "That's a global phenomenon, but Haiti's a prime example. I think this is where we should start."

Haitian President René Préval -- an agronomist by training -- has said he wants agricultural investment in his country prioritized over food aid.

But Riceland isn't pleased by the talk of changing agricultural trade policy vis-à-vis Haiti. Speaking to the AP, a spokesperson for the company insisted that its exports to Haiti are necessary to "feed countries which cannot feed themselves."

(Graph from from "Trade and the Disappearance of Haitian Rice," Trade Environmental Database, American University.)

Food sovereignty honorees show 'there is another way to fight hunger'