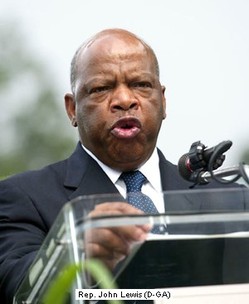 Sunday afternoon, House Speaker Nancy Pelosi marched to the capitol arm-in-arm with Rep. John Lewis of Georgia for the health care vote -- a bit of political theater designed to draw parallels between health reform and the landmark civil rights legislation of the 1960s.

Tea party protesters unwittingly helped make the connection when they shouted "nigger" at Lewis during a Saturday rally. But whether or not HR 3590 should be put on the same level as, say, the Civil Rights Act, one point is indisputable: Yesterday, as in 1964, the South ended up on the wrong side of history.
The numbers tell the story:

* Only one Southern state had a majority of its House delegation vote on the winning side: West Virginia (two out of three).

* Two Southern states -- Alabama and Louisiana -- had zero "yes" votes; Arkansas, Kentucky and Mississippi each only had one representative voting with the majority.

The reluctance to embrace reform included Southern Democrats, whose stubborn opposition -- and vacillation -- gave Pelosi and the White House fits in their frantic push to secure votes last week.

But it was a shortage of votes from Southern Democrats that put the bill in jeopardy, forcing Democratic leaders into last-minute negotiations to win over abortion opponents led by Rep. Bart Stupak of Michigan.

Some notable numbers on Southern Democrats:

* Blue-trending North Carolina had the highest number of Democratic "no" votes in the country (3): Reps. Kissell, McIntyre and Shuler.

Sunday's health reform vote showed the Southern Congressional delegation is far from monolithic, reflecting the contested political terrain in the fast-changing region.
But once again, on what will remembered as a landmark piece of legislation (whatever its flaws), the South also found itself going against the tide of history.