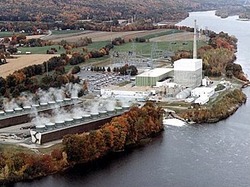 New Orleans-based power giant Entergy is in hot water following revelations that its Vermont Yankee nuclear plant has leaked radioactive contamination to the environment -- and its trouble isn't limited to Vermont.

The Mississippi State Attorney General is also taking aim at the company, questioning Entergy's recent transfer of more than $1 billion from its parent company that oversees its Mississippi operations to its troubled nuclear division.

Some background: In January of this year, it was reported that groundwater monitoring wells at Entergy's Vermont Yankee plant in Vernon, Vt. were contaminated with tritium, a radioactive isotope of hydrogen routinely created in nuclear power plants. In early February, the plant reported that a new groundwater monitoring well at the plant showed levels of tritium at about 775,000 picocuries per liter -- more than 37 times the federal drinking water limit of 20,000 picocuries per liter.

Subsequent tests showed even more dramatic levels of contamination, with direct testing of groundwater on Feb. 6 detecting tritium at levels of 2.45 million picocuries per liter -- almost the same concentration found in reactor process water, which typically has about 2.9 million picocuries of tritium per liter. The Vermont Department of Health has raised concerns that the contamination is making its way to the nearby Connecticut River.

The tritium contamination has been linked to corroded underground pipes at the 38-year-old plant, where a cooling tower also collapsed in 2007 due corrosion of its support structure.

Adding to the controversy over the tritium contamination is the fact that Entergy had long denied that Vermont Yankee had the kind of underground piping system linked to such leaks, which are so common in the aging U.S. commercial nuclear fleet that the federal Nuclear Regulatory Commission has launched a special review of the problem.

In the summer of 2008, Vermont lawmakers created a special panel of nuclear experts to investigate Vermont Yankee's reliability in light of its intention to receive a 20-year extension of its operating license. It was to that panel that Entergy officials -- at times under oath -- insisted there was no such underground pipe system, Vermont's Times Argus newspaper reports:

With revelations ... that Vermont Yankee is leaking tritium -- a radioactive isotope -- into nearby groundwater, it became clear that those statements were wrong. Entergy calls it a "miscommunication" and anti-nuclear activists call it a bald lie.

Last week, amid public uproar over the revelations of the tritium leak and Entergy's misleading claims, the Vermont Senate voted 24-6 to deny the plant the necessary state permission to continue its operations past 2012, when its federal operating license expires. Since that state's law requires both chambers of the General Assembly to approve any nuclear plant relicensing, it appears likely that Entergy will be forced to close the plant unless the state Senate revisits its vote. If shut down, Vermont Yankee would become the first U.S. nuclear power plant to go offline since 1998.

Two of Vermont's leading environmental organizations have asked U.S. Attorney General Eric  Holder to launch a criminal probe into Entergy's provision of false information under oath and carelessly disregard of obligations to maintain critical power plant systems, while the governor in neighboring New Hampshire has called for an NRC investigation.

Meanwhile, Entergy hired an outside law firm to investigate the misleading statements made to Vermont officials. The probe found the company's employees did not intentionally mislead anyone but failed "to specific the context of their communication" which "led to misunderstandings." The company has placed five senior Vermont Yankee employees on administrative leave, reprimanded an another six, and passed the probe's findings on to the Vermont Attorney General.

But that's not the end of Entergy's woes: The company is also facing scrutiny closer to home in neighboring Mississippi, where Attorney General Jim Hood is looking into its recent transfer of $1.3 billion from its utility division that provides retail electric services to Mississippi residents to its division that operates 10 nuclear power plants.

"My translation of the [transfer] means that the regulated utilities like Entergy Mississippi, which are subsidiaries of Entergy Corp., put $1.3 billion less in their pockets in 2009," Hood said in a letter to Vermont Attorney General William Sorrell. "One of my claims in Mississippi is that Entergy Corp. has wrongfully transferred money from the regulated utilities to Entergy's Nuclear businesses and that money should be returned to Mississippi ratepayers."

Hood wants to know what the source was for the $1.3 billion cash payment to its nuclear program, the purpose of the transfer, and whether Entergy plans to use any of the money to pay for the decommissioning of its malfunctioning nuclear plants.

"The ratepayers of Mississippi -- and the rest of those inside Entergy's service area -- have a right to know where their hard-earned money is going, and what it is being used for," Hood said. "When our ratepayers are paying their light bills each month, they should not have to worry that their dollars are headed to Vermont to pay for a leaking nuclear reactor."