Skip to main content
Join the voice for a changing South.
Donate Today
By ProPublicaMarch 25, 2010 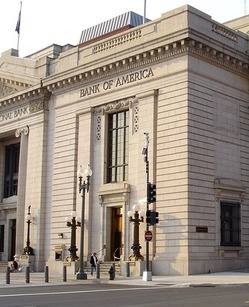 In a blog entry over the weekend, John Hempton (once dubbed "financial blogger extraordinaire") explains that before there was Lehman Brothers' now-maligned maneuver called "Repo 105" ... there were, well, a lot of other banks also trying to do the very same thing.

Such as Bank of America, for instance.

As you may recall, Repo 105 is the accounting maneuver Lehman Brothers used to move billions in assets off its balance sheet, giving the appearance of greater liquidity, less risk, and therefore a healthier company profile.

Hempton runs us through some numbers from Bank of America's 2006 annual report. See below:

In each of these years, the bank's assets at the end of the quarter were lower than its average assets throughout the quarter. This had been happening for a while, according to Hempton. But if the bank was moving its assets off its balance sheet, where was it moving them to? Hempton found the counterparty he believes was assisting Bank of America -- Japanese bank Mitsubishi UFJ, which ended each quarter with higher assets than its average throughout the quarter.

Reuters blogger Felix Salmon points out that the numbers we're talking about here are big -- on par with Lehman's Repo transgressions.

I put in a call to Bank of America, and the media rep there told me he needs "to talk to a number of people," seeing as the bank will "want to be thoughtful about it." I'll update as more information comes in, but given all the financial insiders talking about how Repo 105 was an "old trick," this subject is one to keep watching.

Tuesday afternoon, Bank of America's media rep Scott Silvestri responded to my inquiries with this statement:

"Efforts to manage the size of our balance sheet are routine and appropriate, and we believe our actions are consistent with all applicable accounting and legal requirements."

My only thought is that this is very similar to what Lehman's auditors, Ernst & Young, said in response to criticism about their review of Lehman's accounting, right after Repo 105 hit the news earlier this month. Here's what the auditor's spokesman, Charles Perkins, said at the time:

"Our opinion indicated that Lehman's financial statements for that year were fairly presented in accordance with Generally Accepted Accounting Principles, and we remain of that view."