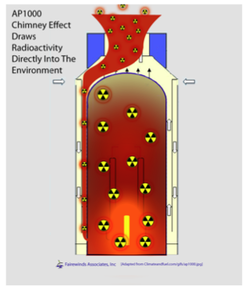 Serious safety concerns continue to mount for the AP1000, a new type of nuclear reactor proposed for power plant sites across the Southeast.

A report released yesterday warns that the design of the Westinghouse reactor makes it particularly vulnerable to through-wall corrosion -- already a widespread problem with existing commercial reactors -- and thus the possibility of leaking radiation in the event of an accident. The report was commissioned by the AP1000 Oversight Group, which involves more than a dozen nuclear watchdog organizations.

"The potential consequences of a radiation release to the environment from a small hole or crack in the AP1000 containment are significant," according to the report by Arnold Gundersen, a nuclear engineer with Fairewinds Associates of Burlington, Vt. and a former senior executive in the nuclear power industry.

His concerns about the reactor's design are supported by Rudolf Hausler, a corrosion engineer with NACE International, a Houston-based organization devoted to the study of corrosion. Hausler states in an affidavit attached to the report that he agrees with Gundersen's assessment "in its entirety."

The groups behind the report -- which include the Blue Ridge Environmental Defense League, Friends of the Earth and the Southern Alliance for Clean Energy -- are calling on the Obama administration to suspend the licensing process for the AP1000 reactors as well as consideration for taxpayer-backed construction loans. They also urged the Nuclear Regulatory Commission and the NRC's Advisory Committee on Reactor Safeguards to launch an investigation into the design flaw.

"We believe the Obama administration must put the brakes on," says BREDL Science Director Lou Zeller.

Gundersen says Westinghouse needs to revamp the design to include radiation filters in the openings of the shield building. "This step must be taken to protect public health and safety," he says.

Westinghouse dismisses the concerns, with company spokesperson Vaughn Gilbert telling the Raleigh (N.C.) News & Observer that "environmental groups holding press conferences against nuclear plants are not surprising to us."

Gundersen explains that the design of the AP1000 invites corrosion by allowing the establishment of a moist, oxygenated environment in the open gap between the steel containment and the shield building. Potential sources of moisture include damp air at plants located near the ocean or in humid climates, drift from the plant's own cooling towers, or leaks and test sprays from the 8 million gallon cooling-water tank slated for the reactor's roof. 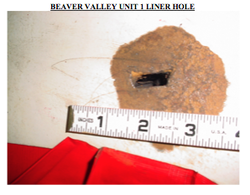 In all, Gundersen's report documents at least 77 instances of containment system degradation at U.S. reactors since 1970. Besides through-wall holes and cracks, these include at least 60 instances of reactor liners pitted by corrosion to the point that they no longer meet the minimum required wall thickness to protect the public from radiation.

Yet Westinghouse's safety analysis for the AP1000 does not account for the corrosion problems in operating reactors, while assuming -- incorrectly, according to Gundersen -- that the probability of radiation leaking from the AP1000 containment is extremely low.

"Westinghouse has not examined the likelihood of through-wall rusting," Gundersen says.

The concerns about the AP1000 corrosion problem come on top of other serious safety issues with the reactor's design. Last year the NRC said Westinghouse failed to demonstrate the adequacy of the AP1000 shield building to protect the reactor from outside threats such as tornadoes, hurricanes and earthquakes. The NRC also raised concerns about whether the shield building will be able to support the massive emergency cooling water tank on top of it.

"It's probably time to pull the design until they resolve these serious questions," says John Runkle, a North Carolina-based environmental attorney who represents the AP1000 Oversight Group.

Construction is already underway on four AP1000 reactors in China's Shandong and Zhejiang provinces, with more being planned for that country. The plants are being built by a consortium involving Westinghouse, a Pennsylvania-based firm owned by the Toshiba Group of Japan, and The Shaw Group of Louisiana.