Skip to main content
Join the voice for a changing South.
Donate Today
By Sue SturgisApril 29, 2010 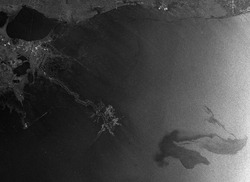 Date of the explosion and fire onboard Transocean's Deepwater Horizon drilling rig in the U.S. Gulf of Mexico: 4/20/2010

Distance of the rig, which was being used by BP, from the Louisiana coast when the disaster occurred: 41 miles

Date on which a lawsuit was filed by a missing worker's wife claiming negligence on the part of Transocean, BP and Halliburton, which was cementing the well when the explosion occurred: 4/27/2010

Number of deaths associated with offshore drilling operations in the Gulf of Mexico since 2001: 69

Time period during which MMS said it saw "no discernible improvement by industry" in terms of safety: 7 years

Frequency with which MMS wants operators to have their safety programs audited: every 3 years

Number of letters oil companies have sent protesting the proposed regulations, citing the expense: over 100

Number of oil spills of over 2,100 gallons that have occurred in the Gulf over the past decade: 172

The National Oceanic and Atmospheric Administration's current estimate of the amount of oil being leaked from the Gulf disaster site: 5,000 barrels a day

Factor by which that surpasses the previous estimate: 5 times

Square miles the slick is now covering: more than 2,200

Date on which cleanup crews conducted a "controlled burn" to help reduce risks from the oil slick: 4/28

Date on which official forecasts say the oil slick may begin impacting the Louisiana shoreline: 4/30

Number of Louisiana fishermen who packed a meeting this morning to help pinpoint locations for oil containment rings: nearly 200

Rank of the threatened area among those with the largest total seafood landings in the lower 48 states: 1

Percent of the nation's wild shrimp crop the area produces: 50

Number of species put in harm's way by the spill: more than 400

Current estimated cost of the disaster: at least $1 billion

(Click on figure to go to the original source.)

(Satellite radar image of the Gulf oil slick, the black blob in the lower right corner, is from the SkyTruth blog; it was taken April 26 by the European Space Agency.)

ALTERNATIVES, BABY, ALTERNATIVES: How to win the offshore drilling debate

STILL, BABY, STILL? Some Southern leaders rethink offshore drilling in wake of disaster, but most stay the course