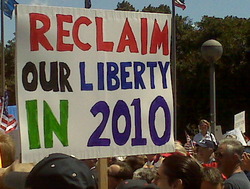 Tea partiers are gearing up for Tax Day protests this Thursday, which marks just over a year since the new conservative movement exploded on the scene.

For tea party leaders, one goal this week is to distance themselves from unpleasant scandals involving tea-linked candidates and reassure the public they're not a fringe cause, but just engaged citizens like you and me.

The idea that the tea party is "going mainstream" has been the headline message (at least for Fox News) coming out of two recent polls of the tea party movement, one by Rasmussen and the other by Gallup. But based on these and other polls, what do we really know about the tea partiers who will be congregating this week?

First, it's clear the tea party movement has grown. The Rasmussen survey found 24 percent in the U.S. as identifying with the tea party cause, up from 16 percent a month ago. This jibes with the Gallup poll, which finds 28 percent calling themselves a "supporter" of tea partyism.

Now, it's clear that any movement which can garner support from one out of four Americans can't be simply written off as "fringe." And it's also true that, despite being a bit older, more male, wealthier and whiter than the rest of the country, the demographic differences aren't as big as you might think.

But drilling deeper into the data, the limitations of the tea party's appeal become a bit clearer, which suggests they may be hitting the ceiling of their political influence.

THE COLOR OF TEA

The most obvious limitation is race. Gallup finds that 79 percent of tea party supporters are white, compared to 75 percent of U.S. adult population and 62 percent of the country overall. (Interestingly, six percent of "non-Hispanic blacks" and 11 percent who identify as "other" also put themselves in the tea party camp.)

But it's not just the racial makeup of the movement, it's also their racial attitudes. While racist antics among tea party protesters have made this an article of faith for many on the left already, the racial character of the tea party got some scholarly backing from a multi-state survey released this week by Christopher Parker at the University of Washington.

In Parker's survey of 1,015 residents in seven states, he found that "those who are racially resentful, who believe the U.S. government has done too much to support blacks, are 36 percent more likely to support the tea party than those who are not."

Tom Schaller at 538.com put these findings into helpful graphs, which show how the racial views of white tea party sympathizers vary from those who oppose the tea party: 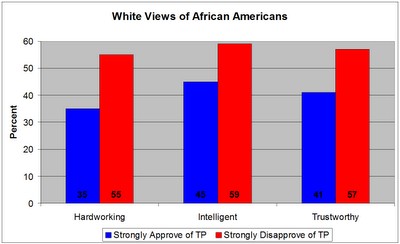 The views of white tea partiers is also deeply at odds with white opponents of the movement on the subject of immigration: 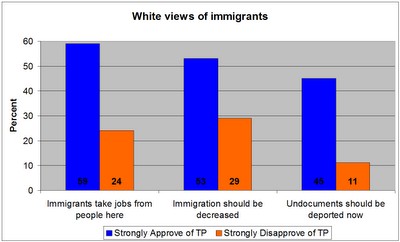 Another interesting data point: Southern whites were 12 percent more likely to be pro-tea party than whites in the rest of the U.S. -- which is remarkably similar to the regional spread in support for President Obama.

Note that the data only shows the difference between those who "strongly approve" and "strong disapprove" of the tea party -- it leaves out the sizable chunk of our population in the middle.

But this body of evidence suggests a few things: While the tea party may be able to make some media noise and influence a few Republican primaries in the short-term, the movement's narrow and shrinking core base puts it on the wrong side of our country's demographic trajectory.

What's more, the tea party movement clearly draws strength from whites who fear and resent their loss of social position (both real and imagined). That's given rise to a politics of racial resentment which will not only further drive them away from African-Americans, Hispanics/Latinos and other people of color, but also whites (especially younger and urban) who don't share such racial hostilities.

FOR MANY, THE JURY'S STILL OUT

Another key insight from this latest batch of tea party polls may come as a surprise to avid politicos on the left and right: Most people are undecided about the tea party cause, and many have never heard of it.

In Gallup's poll, 46 percent of respondents said they were "neither" a supporter or opponent of the tea party, or had "no opinion." In the Rasmussen survey, those who view the tea party unfavorably (42 percent) slightly edged out those who were favorable (40 percent), but 18 percent weren't sure. Sixty-six percent said they had "no ties" to the movement or "weren't sure."

In Parker's University of Washington poll, 30 percent said they had never heard of the tea party. Unlike the media, pundits and political enthusiasts across the political spectrum who track the tea party's every move, it's not even on their radar.

That the tea party movement would be a question mark -- and in some cases, invisible -- to the U.S. public is no surprise, given that it is splintered into dozens of competing factions and has no clear agenda beyond, as one political scientist put it, "some kind of inchoate anti-government anger that has little to hold it together."

Even on the issues tea partiers are clear about, it's not clear they're poised to broaden their influence. For example, repeal of health care reform is expected to be a key rallying cry at the tea party protests this week. But public opinion about health reform is, at best, mixed. It's definitely unlikely to produce a growing tide of opposition like, say, the Iraq war did.

In short: In the coming year, it's clear the tea party movement certainly has the money, numbers and media guns -- including a near-endless supply of right-wing TV and radio pundits to fan the flames -- to influence the public debate and affect politics, especially Republican primaries, in states like Arizona and Florida.

But tea partiers should enjoy it while they can: Given the movement's fuzzy agenda, narrow base and controversial views -- especially on race -- that give ammunition to their progressive opponents and will increasingly alienate the middle, their political moment in the sun is unlikely to last.

Art Pope vs. cooperative economics: Who will save Raleigh's food desert?