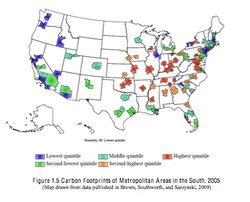 When it comes to energy reform, the American South has often been a deadweight, anchoring the country to the status quo. There are any number reasons why: It's oil, coal, and nuke country. It's heavily Republican. Many of the affluent white men who dominate its politics view energy as part of the culture war, another attack by hippies on the American way of life. Plus they like trucks.

But one phenomenon more than any other shapes the South's attitude toward energy policy. It lies beneath all the others, yet it's the least well-understood and the most rarely discussed. What is it?

Instead of ruining the surprise, let's take a quick detour that will help make the point.

Energy efficiency in the South

According to a report released this morning, for every dollar the South invests in energy efficiency, it will receive an average of $2.25 in benefits over the next 20 years in jobs, economic growth, and lower bills.

"Energy Efficiency in the South" is a detailed new study from researchers at the Georgia Institute of Technology and Duke University's Nicholas Institute; it uses models based on U.S. Energy Information Administration forecasts to estimate the benefits of various energy efficiency policies across three sectors: residential, commercial, and industrial. The conclusions, while in keeping with past research on the subject, are nonetheless pretty jaw-dropping.

According to the study, an aggressive set of energy efficiency policies in the region could:

4. Result in substantial water conservation. The reduction in power plant capacity would save southern NERC regions 8.6 billion gallons of freshwater in 2020 and 20.1 billion gallons in 2030.

(Left off this list are the incredible health benefits of reducing fossil fuel use.)

The reason efficiency has such potential in the South is that it's the least efficient region of the country and the most fossil-fuel dependent. Low-hanging fruit abound. And it's not just that the region as a whole would benefit, it's that the benefits are incredibly egalitarian. Virtually everyone in the region would see their fortunes improved.

So, let's see: Create jobs, save ratepayers money, save businesses money, save state governments money, save lives, spur economic growth ... seems like a no-brainer! A case study for forward-looking public policy. And yet, despite their obvious benefits, such policies are not forthcoming in the South, and they're unlikely to appear any time soon. Why is that?

Here we return to the single biggest factor in the South's energy intransigence: the energy companies that dominate it are not participants in a competitive market. Most of the region's utilities are regulated monopolies, which means their customers and their profits are guaranteed by law. They don't compete; they manage state regulators, which is a whole different kind of skill. They are involved in cozy, good ol' boy relationships with those regulators that in some cases stretch back generations. They have their way of doing things and it works for them. Why would they want change?

In particular, regulated monopoly utilities have one way to make more money: build more power plants and sell more power. They convince regulators to offer a set return on capital, and then they deploy the capital to get the return. So all that decreased consumption? All those savings on power bills? All those avoided power plants? That's all bad news for southern utilities. It translates directly into lost revenue for them.

That's why Southern Company, the region's largest utility, has more lobbyists in D.C. than any other energy company, almost double the runner up. Its position has always been secured through influence over politicians. It's got a bunch of dirty old power plants grandfathered under the Clean Air Act. It's got guaranteed access to a growing rate base. It's trying its damnedest to keep any hint of market competition or other radical changes as far away as possible. And the last thing it wants is for its customers to start using less of its product.

It's a damn shame. If we treated efficiency as an energy source, we would see that the South has access to an enormous reserve of it. It's an abundant supply, and it's cheap -- cheaper than coal, cheaper than nukes, cheaper than natural gas. The South is a veritable ... dare I say it? ... no, I shouldn't ... but I must ... Saudi Arabia of energy efficiency.

But the presence of huge demand and cheap supply means nothing unless there is a market set up to bring the one to the other. And there's no market in the South. Energy incumbents control policy in the region, and they've been publicizing costs and privatizing profits for decades. They don't want a new competitor. It's that simple.