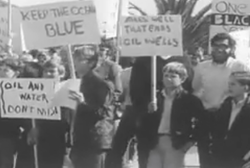 Officials are saying it could be months before they're able to halt the flow of the approximately 42,000 gallons of oil a day that are now pouring into the Gulf of Mexico from BP's sunken offshore drilling rig that exploded last week.

While an effort is underway to try to activate the well's blowout preventer and shut off the oil flow, the operation is complex and company officials warn it might not succeed. The alternative plan -- drilling nearby relief wells -- could take two to three months to stanch the flow.

On Friday, the U.S. Coast Guard suspended its search for the missing workers, who are now presumed dead.

"Our deepest sympathies and prayers go out to the families of these 11 crewmembers," said Rear Adm. Mary Landry, commander of the Eighth Coast Guard District. "Suspending a search is one of the most difficult decisions a commander has to make."

The oil slick from the Transocean Deepwater Horizon drilling rig now covers 600 square miles and remains about 30 miles offshore. But states along the Gulf Coast have been warned to brace for impact, and Louisiana is already placing containment booms around sensitive coastal areas. There are particular concerns about the oil reaching the Chandeleur Islands off the Louisiana coast, key hatcheries for pelicans and other birds.

It's still not known what caused the explosion.

The spill comes just weeks after President Obama announced plans to expand offshore drilling to untouched areas along the Southeast's Atlantic Coast and off Alaska.

While the White House has said the spill is no reason to give up drilling, some are warning that the disaster could spell trouble for those plans. Among them are New Orleans attorney Keith Hall of Stone Pigman, a law firm that represents some of the country's largest oil companies, the Oil & Gas Financial Journal reports:

"This week's disaster could throw a monkey wrench into Obama administration's recently announced plan to have the Minerals Management Service open up new areas for off-shore drilling on the Outer Continental Shelf," he said. "An accident of this magnitude, involving some of the biggest players in the business, will unfortunately provide ammunition for those opposing any form of expanded energy exploration in the Gulf and other areas."

In addition to spawning litigation, the explosion is sure to incite a major government probe of what went wrong and what equipment components may have been behind the fiery blast. Hall notes that while oil spills are generally exempt from Superfund regulations, the Clean Water Act as well as the Oil Pollution Act, a federal law passed after the enormous Exxon Valdez spill in Alaska impose express liability for offshore oil spills, regardless of whether the oil reaches shore. "Under these laws, the federal government could impose fines, in addition to significant clean-up and emergency response costs," Hall noted.

But will the Gulf disaster spark a grassroots movement like the one that rose up following the catastrophic January 1969 blowout from a drilling platform off the coast of southern California near Santa Barbara? That watershed disaster -- which came to be known as the "spill that was heard around the world" -- resulted in crude oil covering 35 miles of the state's coastline and the death of thousands of birds.

The outrage and organizing that disaster inspired eventually led to the passage of the National Environmental Policy Act and helped inspire other key environmental laws.

To learn more about the grassroots response to the 1969 disaster, check out this preview for "Birth of a Movement," an upcoming documentary film about the Santa Barbara disaster that's currently in production by Cage Free Productions and Spreading Solutions Productions.


(Image above is a still from "Birth of a Movement.")