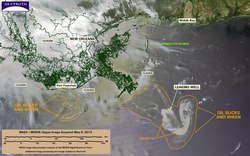 The media coverage of the BP oil disaster to date has focused largely on the threats to wildlife, but the latest evaluation of air monitoring data shows a serious threat to human health from airborne chemicals emitted by the ongoing deepwater gusher.

The findings show that levels of airborne chemicals have far exceeded state standards and what's considered safe for human exposure.

For instance, hydrogen sulfide has been detected at concentrations more than 100 times greater than the level known to cause physical reactions in people. Among the health effects of hydrogen sulfide exposure are eye and respiratory irritation as well as nausea, dizziness, confusion and headache.

The concentration threshold for people to experience physical symptoms from hydrogen sulfide is about 5 to 10 parts per billion. But as recently as last Thursday, the EPA measured levels at 1,000 ppb. The highest levels of airborne hydrogen sulfide measured so far were on May 3, at 1,192 ppb.

Air testing results show VOC concentrations far above these state standards. On May 6, for example, the EPA measured VOCs at levels of 483 ppb. The highest levels detected to date were on April 30, at 3,084 ppb, following by May 2, at 3,416 ppb.

Here's a chart based on the data from LEAN's analysis, which was done by award-winning analytical chemist Wilma Subra: 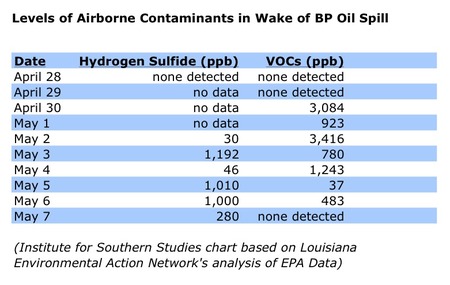 (Satellite image of the Gulf oil spill taken May 9 from SkyTruth. Click on image for a larger version.)