Skip to main content
Join the voice for a changing South.
Donate Today
By Sue SturgisMay 24, 2010

Coal ash is one of the country's biggest waste streams and is full of toxic substances, yet it remains virtually unregulated. Can Washington overcome the fierce opposition of energy interests to protect communities and the environment?

When a billion gallons of coal ash broke loose from a holding pond at the Tennessee Valley Authority's Kingston power plant near Harriman, Tenn. in December 2008, registered nurse Penny Dodson was living nearby with her 18-month-old grandson, Evyn.

Like most of her neighbors, Dodson never gave much thought to the impoundment until it collapsed, destroying three homes, damaging 42 others and inundating the nearby Clinch and Emory rivers with the sludgy coal waste.

The Dec. 22 spill blanketed Dodson's property, but TVA assured residents it wasn't toxic, so she and Evyn stayed put. But a week after the disaster, Evyn -- who suffers from cerebral palsy -- became very ill.

He refused to play or eat, his eyes turned red and watery, and he began coughing and wheezing. He eventually landed in the hospital, where tests showed his body had high levels of arsenic and lead, contaminants in the coal ash. The doctors blamed his troubles on airborne ash and advised them to move. 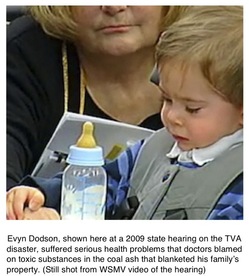 "I carry guilt because we stayed," Dodson said in testimony to state lawmakers at a hearing held two months after the disaster. "Because I was told that we were going to be safe, and I believed them."

Since that fateful incident, other energy disasters have grabbed headlines: the blast at a West Virginia coalmine that left 29 miners dead, and an explosion on BP's offshore oil drilling rig that killed 11 workers and has released millions of gallons of oil into the Gulf of Mexico.

Coal ash isn't receiving as much attention nowadays. But a six-month investigation by Facing South finds that it poses a growing threat to public health and the environment -- even as coal ash remains unregulated by the federal government due in large part to political pressure from energy companies.

But the days of coal ash escaping the scrutiny of federal regulators are numbered. Earlier this month, the U.S. Environmental Protection Agency -- after months of delay due to maneuvering among the EPA, White House Office of Management and Budget, and the politically powerful electric utility industry -- took the unusual step of releasing two different proposals for how to regulate coal ash.

EPA is now asking the public to weigh in on the two options during a 90-day comment period that will begin once the proposed rules are published in the Federal Register. (For a pre-publication version of the rules, click here.) As EPA Administrator Lisa Jackson said when the regulatory options were rolled out, "We look forward to the participation and the comments of the American people."

What happens in the coming months will determine whether communities will be protected from the prospect of another coal ash disaster like the one that struck eastern Tennessee, as well as from less visible but no less dangerous coal ash disasters unfolding in communities nationwide.

Hazards in our midst 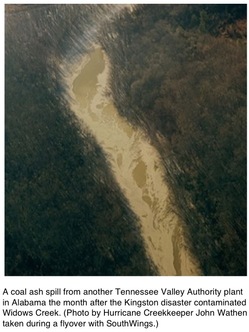 When coal is burned to produce electricity, it leaves behind a variety of wastes -- fly ash, bottom ash, boiler slag and more -- known collectively by regulators as coal combustion waste, or more commonly as coal ash.

U.S. coal plants generate more than 150 million tons of coal ash each year, according to a recent Environmental Protection Agency analysis. That makes it the second-largest industrial waste stream in the U.S. after mining waste.

Because coal ash is not regulated by the federal government, the EPA had never set out to count the number of impoundments for disposing of coal ash waste nationwide.

But after the Kingston disaster, the agency launched a search that turned up a total of 584 impoundments and similar disposal sites at more than 200 facilities, mostly power plants.

Of the more than 580 impoundments the EPA discovered, it rated the hazard potential of about a third of them. Of those, 49 units have been rated as high hazard -- meaning a failure like the one at Kingston would likely kill people. Another 60 units are rated as significant hazards, meaning their failure could lead to widespread destruction like the Kingston disaster. Many of the communities at greatest risk from hazardous impoundments have higher-than-average poverty rates.

These ratings are significant, because failures of coal ash impoundments are not rare occurrences:

* In July 2002, a sinkhole developed in an impoundment at the Georgia Power/Southern Company's Plant Bowen in Bartow County, Ga., covering four acres and reaching 30 feet in depth. The sinkhole released 2.25 million gallons of a water and coal-ash mix to a tributary of the Euharlee Creek; that creek feeds the Etowah River, which provides drinking water to local communities and habitat to imperiled species.

* In January 2009 -- less than a month after the catastrophic collapse at the Kingston plant -- a pipe inside a coal ash impoundment at TVA's Widows Creek plant in northeastern Alabama leaked, sending as much as 10,000 gallons of coal ash waste into nearby Widows Creek, a tributary of the Tennessee River. The intake for Scottsboro, Ala.'s water supply lies about 20 miles downstream of the spill site.

Despite the clear hazards, many of these coal ash dumps are unregulated not only by the federal government -- they're virtually unregulated at the state level as well. For example, most states don't require groundwater monitoring and runoff collection at coal ash impoundments, and more than half don't require liners or financial assurances to guarantee the owners can pay for cleanup of any contamination that might occur.

"It's a situation that needs to be fixed," said attorney Lisa Evans, a former EPA official who now works with the environmental law firm Earthjustice. "We're talking about a potential loss of human life." 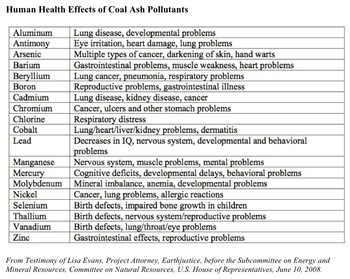 Catastrophic collapses like the one at the Kingston plant in Tennessee aren't the only threat posed by unregulated coal ash impoundments. Most of the more than 100 known and suspected cases of environmental damages caused by coal ash that have been documented by the EPA and environmental groups involve contaminants from the ash seeping into nearby groundwater and surface water supplies from impoundments, which are typically unlined.

In fact, a recent EPA risk assessment found that people who live near coal ash impoundments and drink from wells have as much as a 1 in 50 chance of getting cancer due to contamination with arsenic, one of the most common and dangerous pollutants in coal ash. The same risk assessment found that living near coal ash impoundments also increases the risk of damage to the liver, kidneys, lungs and other organs.

And as a consequence of efforts to make burning coal cleaner, new technology to collect airborne coal ash from the smokestacks of power plants has increased the concentration of toxic contaminants in coal ash, heightening its public health and environmental risks.

The dangers of coal ash aren't just hypothetical -- it's been linked to at least 100 cases of toxic contamination across the country. The following examples were detailed in a recent report by Earthjustice and the Environmental Integrity Project:

* At SCE&G's Wateree Station in Eastover, S.C., arsenic contaminated groundwater at the site at 18 times the federal drinking water standard, according to the same report. The contamination has migrated to adjacent property and is accumulating in catfish in the nearby Wateree River.

* Selenium discharges from ash impoundments at AEP's John Amos Plant along the Kanawha River in Winfield, W.Va. have exceeded the facility's permit limits, according to publicly available monitoring data, while fish taken from nearby Little Scary Creek have registered selenium levels above what the state considers safe for human consumption. Exposure to excessive levels of selenium over the short term can cause nausea, vomiting and diarrhea, and over time can result in neurological effects.

* Arsenic in groundwater beneath Progress Energy's Sutton Steam Plant on the Cape Fear River near Wilmington, N.C. has been detected at levels as high as 29 times the federal drinking water standard and is migrating off-site, according to state monitoring data. And Sutton is no exception: An independent analysis of state data found that every one of 13 coal ash impoundments located next to North Carolina power plants owned by Progress Energy and Duke Energy that were tested are leaking contamination to groundwater. 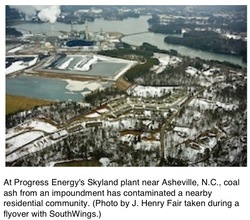 Communities can be exposed to the hazardous ingredients of coal ash through means other than the water supply. At Progress Energy's Skyland plant near Asheville, N.C., dried-out ash from a poorly managed impoundment blew through the air onto a neighboring condominium community, accumulating on residents' homes, lawns and cars. A lab analysis done as part of the state's investigation into the incident found that the material contained highly toxic, cancer-causing elements including arsenic, chromium and radioactive strontium.

Dry coal ash in landfills, as well as the use of coal ash as a substitute for fill dirt in construction projects, have also been proven to cause environmental damage.

The health consequences of the public's exposure to coal ash can take years to develop, but in some cases the impact has been more acute. For example, leaking coal ash impoundments at PPL Montana's Colstrip power plant in Rosebud County, Mont. contaminated a well at a nearby Moose Lodge, where members suffered stomach ailments from drinking the water. Fifty-seven Colstrip residents, including members of the Moose Lodge, filed a lawsuit against the company that was eventually settled for $25 million.

"These companies fought every step of the way," plaintiffs attorney Jory Ruggiero said at the time. "You can't hide the facts when you're testing wells and they're coming up contaminated."

These growing public health and environmental concerns -- along with the Kingston disaster in Tennessee -- have brought the country to a watershed moment in confronting the dangers of coal ash.

The two regulatory alternatives put forward by the EPA this month include stark differences. Both proposals would regulate coal ash under the Resource Conservation and Recovery Act, the primary federal law governing solid waste. But one option would regulate it more strictly as a "special waste" under RCRA Subtitle C, which governs hazardous waste, while the other would regulate it less strictly under RCRA Subtitle D, which applies to ordinary waste. Regulating coal ash under RCRA Subtitle C would give EPA clear enforcement authority, while placing it under Subtitle D would give EPA the power only to set guidelines for managing coal ash, leaving oversight programs to the states and enforcement to citizen lawsuits.

Energy companies have lobbied fiercely against treating coal ash as hazardous waste, arguing that such an approach would be too costly and would discourage efforts to recycle coal ash into other products. Meanwhile, environmental groups make the case that coal ash is clearly hazardous and should be treated that way under law.

With the EPA now putting the future of coal ash regulation up for public debate, environmental advocates like Scott Slesinger, legislative director for the Natural Resources Defense Council, say citizens must speak up if they want to avoid another tragedy like the one that devastated the lives of Penny and Evyn Dodson and their neighbors. 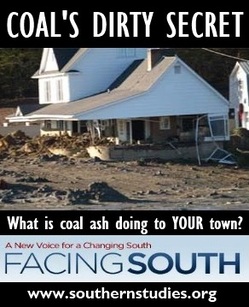 TOMORROW: Disaster in East Tennessee: It's been nearly a year and a half since the massive TVA coal ash spill. But for communities touched by the spill, it's an ongoing catastrophe.

Sue Sturgis is an investigative reporter and editorial director of Facing South. This piece is the first installment in an in-depth, week-long series on the growing national problem of coal ash and the political battle over regulations.