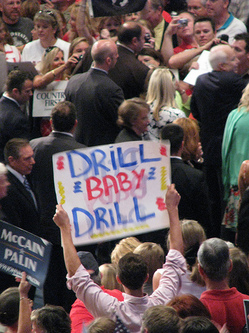 With oil still gushing from the site of BP's failed Deepwater Horizon rig in the Gulf -- a disaster that's now likely to eclipse the scale of the Exxon Valdez -- some politicians are rethinking the "drill, baby, drill" push for expanded offshore drilling.

But for others -- including many leading Republicans and a few Democrats -- the message seems to be: "Still, baby, still!"

Facing South took a tally of where key politicians stand in the wake of the Gulf oil disaster:

The political fallout from the spill has been most interesting in the states nearest to the disaster:

* In Alabama, GOP Gov. Bob Riley is reconsidering his once-staunch support for drilling. In 2008, he said "we need to drill" and found it "astonishing" Congress wouldn't lift a drilling moratorium. But when asked about his views on Wednesday, Riley said he will have "a completely different attitude" if the state's efforts to protect their shoreline failed.

* Riley's fellow AL Republican Sen. Richard Shelby was less reflective, saying Congress should "absolutely" move forward with offshore drilling: "We can learn something from this."

* Gov. Haley Barbour in Mississippi doesn't appear to think there's anything to be learned at all: In an interview with CNN, he downplayed any potential fallout from the spill, saying it's "not particularly damaging." He's still pro-drill.

* In Louisiana, Gov. Bobby Jindal (R) has focused his statements on the immediate disaster response, as has Rep. Joseph Cao (R). But Sen. Mary Landrieu (D) immediately made a statement from the floor: "It is more risky to import our oil in tankers than it is to drill for it offshore, even considering this disaster that we're dealing with today. Retreat is not an option. ... We must continue to drill." Sen. David Vitter (R) also encouraged Obama to press forward with new drilling projects.

* As for Texas, Gov. Rick Perry (R) drew criticism for describing the disaster as an unavoidable "Act of God" en route to calling to stay the course on drilling.

What about the battleground Sunshine state and its $65 billion-a-year tourism industry?

* The spill is already making the Florida U.S. Senate race more interesting: Gov. Charlie Crist, after waffling on drilling -- and deciding to run as an independent -- is now urging caution: "If this doesn't make the case that we have got to go to clean energy, ... I don't know what does." GOP senate candidate Marco Rubio said he won't change his (pro-drill) mind.

* Democratic candidate Rep. Kendrick Meek has seized the moment to carve out a clear anti-drilling position: "It's time to put an end to any and every misguided attempt to drill offshore and put Florida's coasts and economy at risk."

* U.S. Sen. Bill Nelson (D) has been even more strident, swiftly demanding that Obama issue a moratorium on new drilling, and getting a reputation for mocking his "drill, baby, drill" colleagues in the senate. His GOP counterpart Sen. Georgie LeMieux is taking a more nuanced stand, arguing against new drilling until the BP spill is better understood, but still in favor of "safe" drilling.

* Another FL Republican has also come on board for a temporary drilling moratorium: U.S. Rep. Jeff Miller: "Right now, there should be no new drilling, period ... until we find out what occurred. We can't risk another disaster."

Plans to expand offshore drilling include the Atlantic seaboard -- prompting a variety of responses from coastal states:

* In Virginia, Gov. Bob McDonnell (R)  -- who ran on a pro-offshore drilling platform in 2009 -- allowed the disaster was "a setback." but on Monday flew to an industry conference -- co-sponsored by BP -- to tout the benefits of offshore exploration, saying that drilling could start off the coast of Virginia as soon as 2012.

* Not all Virginia lawmakers agree: Sen. Mark Warner (D) -- a previous drilling advocate -- said it was "appropriate" for Obama to pause drilling plans. Northern VA Rep. James Moran (D) wrote a letter to Interior Secretary Ken Salazar saying, ""Regardless of ideology, this situation should give everyone pause regarding expansion of offshore drilling."

* In North Carolina, Gov. Beverly Perdue (D) -- who's held a study-and-see approach to drilling -- merely said the disaster "emphasizes the importance of making sure that any drilling off our coast would be safe." Sen. Kay Hagan (D) was similarly non-committal, saying "we need to understand what went wrong and we need a comprehensive plan."

* NC's Sen. Richard Burr (R), a member of the Senate Energy Committee -- who falsely claimed that "there wasn't a drop of oil" spilled in the Gulf during Hurricane Katrina (there were at least 124 spills) -- has been silent since the spill. But just weeks before the disaster, Sen. Burr went on CNBC to criticize Obama for not moving fast enough on offshore drilling.

* Unlike many in his party, beleaguered South Carolina Gov. Mark Sanford (R) already had "serious reservations" about offshore drilling, even writing to President Bush in 2008 pleading for him to "protect the coral reefs." He's been quiet since the Gulf spill.

* Others in South Carolina appear unfazed: Sen. Lindsey Graham (R) said halting offshore drilling after the Gulf disaster would be like halting space exploration after the space shuttle Challenger explosion.

Know other politicians who are changing their tune -- or digging in on their earlier position -- in the wake of the Gulf oil crisis? Let us Armageddon. I did this for the Coast Guard many years ago. Yeah, it's bad. And it's terrible that there's a spill out there. But I would remind people that the oil is twenty miles from any marsh. ... That chocolate milk looking spill starts breaking up in smaller pieces ... It is tending to break up naturally.

The money behind Big Oil's win on Atlantic drilling