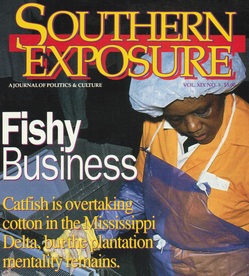 By Joseph B. Atkins

OXFORD, Miss. - Hundreds of workers at Delta Pride Catfish, Inc., in the Mississippi Delta are poised to go on strike, 20 years after a previous strike that made Southern labor history.

The workers are expected to reject the company's final offer of a contract that would "roll the clock back to the time of the (1990) strike," according to labor attorney Roger Doolittle.

"If we agreed to this contract, it would be an all-time low for workers in the history of the catfish industry," the Jackson, Miss.-based attorney for the United Food and Commercial Workers, Local 1529, said. Local 1529 President Leon Sheppard agreed. "It is pretty ugly. They want to keep the Delta area 150 years in the past. Everything we fought for, they just want to sweep away."

The local has close to 600 members at Delta Pride in Indianola, Miss., and with plants operated by its partner firm, Country Select, in Isola, Miss., and Belzoni, Miss. The union has been in negotiations with Delta Pride over a new contract for a year-and-a-half.

Employees earn on the average $8 to $9 an hour, and they haven't received a raise since 2006. The contract would create a seven-day work week, delete daily overtime, double the probationary period for new hires to six months, reduce seniority benefits, give the company free reign in contracting out work, triple worker contributions to company health insurance over a three-year period, allow the company to withdraw from the pension plan with 30 days notice, and eliminate severance pay if the plant closes.

Efforts to contact company officials and the company's attorney were unsuccessful. However, officials have said that the contract reflects the company's need to level the playing field with non-union competitors. Workers are expected to vote on the contract as early as next week.

A strike by Delta Pride workers likely would garner national attention and invoke memories of the successful three-month strike at the same company in 1990.

Most of the workers were black women (as they still are today), and the strike was called an event that brought together the civil rights and labor movements. Joseph Lowery, president of the Southern Christian Leadership Conference, told workers in 1990 that "90 percent of the work (is) done by blacks; 90 percent of the money (is) gotten by whites."

The 1990 strike was the largest by black workers in Mississippi's history. A national boycott of Delta Pride products was called. Entrances to non-participating Winn-Dixie store in Atlanta were blocked. The company fought back hard, hiring scores of replacement workers and charging union members with trespassing. A company official allegedly threatened people on the picket line with a gun, prompting a charge of unfair labor practices against Delta Pride.

Employees at the time complained of working conditions that led to hundreds of them developing carpal tunnel syndrome, use of the "speed-up" on the assembly line, a strict five-minute limit on bathroom use, and a "plantation mentality" of low wages and benefits yet hard, 10-to-13-hour workdays.

With the contract they gained after the strike, workers received a 75-cent pay raise over the $4.05 average wages they were previously getting. Still, relations between the company and union remained uneasy, and future contract negotiations were stalled and stalemated.

Strikes are last resorts, particularly in a troubled economy with high unemployment rates, and organized labor faces an entrenched opposition after decades of decline. Witness the struggle between the Memphis Commercial Appeal and Memphis Newspaper Guild, whose members haven't had a raise in seven years.

The new contract offers small raises but also gives the company the green light to outsource jobs and lay off workers. Like the Commercial Appeal, Delta Pride hired a non-local "union-busting" legal company -- the Coleman firm out of New Orleans -- to argue its side at the negotiating table.

Unions across the region and country are showing new feistiness, however. UNITE-HERE, the union for hotel, casino, textile, and hospitality workers, continues to be successful in organizing casino workers in Mississippi and elsewhere. The Coalition of Immokalee Workers in Florida has won agreements from Whole Foods, Subway, McDonald's, Burger King, and Aramark that have led to higher pay for immigrant field workers.

The 1990 strike by Mississippi catfish workers is still considered a landmark event in the history of the Southern labor movement. Will history repeat itself?

PHOTO: Cover of Southern Exposure magazine in fall 1991, which published the first in-depth expose of the Southern catfish industry and the growing movement of the largely African-American workers to organize.

Joseph B. Atkins is a veteran journalist, columnist, and professor of journalism at the University of Mississippi. He is the author of Covering for the Bosses: Labor and the Southern Press(University Press of Mississippi, 2008). His blog is laborsouth.blogspot.com.