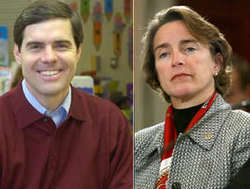 Labor unions are taking a beating from political pundits today in the wake of Tuesday's Arkansas primary, which saw incumbent Sen. Blanche Lincoln eking out a 4-point victory over labor-backed Bill Halter.

Of course, one can question what, if any, deep lessons about labor and U.S. politics can  be gleaned from a single hard-ought and incredibly close race which easily could have gone the other way.

But the fact is that labor invested heavily in Halter -- money, time and hopes -- making it inevitable that the Arkansas primary would become a referendum on labor's political clout. And in the end, Halter -- and labor -- came up short.

The spin from the Democratic and media establishment is clear: Labor "fell flat," crows the National Journal. An anonymous White House staffer infamously said "Organized labor just flushed $10 million of their members' money down the toilet on a pointless exercise."

But this kind of Lincoln triumphalism -- as well as bitter anti-Lincoln teeth gnashing -- misses some of the more valuable lessons to be learned about the Arkansas race and Halter's campaign:

* START EARLIER: Bill Halter didn't announce his challenge campaign until March 1, just 11 weeks before Arkansas' May 18 primary. That's a miniscule window of time to ramp up a challenge campaign, especially against a well-funded incumbent who's been in Congress since 1993.

While this uphill challenge makes it notable that Halter came as close to defeating Lincoln as he did, it also underlines the need for a longer-term strategy when taking on opponents of Lincoln's clout.

* LOCAL BASE IS IMPORTANT: As I noted earlier, there was one glaring disconnect in Halter's campaign: Labor was central to Halter's candidacy, but Arkansas has the 2nd-smallest union membership in the country (4.2%). Arkansas is a right-to-work state whose economy and political culture is dominated by fiercely anti-union employers like Wal-Mart and Tyson Foods.

This business-dominated political culture is what created Sen. Blanche Lincoln and her loyalty to corporate interests on issues from health reform to labor rights and student loan reform, which is precisely why labor nationally decided to target her.

But it's also why Arkansas only has 47,000 union members, giving it an extremely small local base from which to launch a campaign where labor is a central player. As one local union activist told me, "Voters here respond to local people telling them how to vote. We just didn't have a big enough local base on the ground."

It also made it easy for Lincoln and surrogates like Bill Clinton to deploy an effective old-school anti-union message and label Halter's campaign as beholden to "outside" interests.

* THE ESTABLISHMENT IS POWERFUL: Many took Sen. Blanche Lincoln's falling approval numbers to be a sign of weakness (which they very well may be when it comes to the general election in November). But time and again, Lincoln showed that being part of the Democratic establishment -- and being aligned with the agenda of big corporations -- has its advantages.

Lincoln has been the #1 recipient of political PAC money of any candidate in the country this election cycle, building a formidable war chest especially from business interests. She could count on political ads from the U.S. Chamber of Commerce, endorsements from the White House and campaigning from a former U.S. president.

Especially given the constraints of time and a small organizing base mentioned above, the powers of incumbency and establishment backing became too much for Halter to overcome.

None of this is to say that, from the perspective of labor and progressives, Halter's campaign wasn't worthwhile. It put Lincoln and other right-leaning Democrats on notice. It likely pushed Lincoln to take a stronger stance on financial reform, embracing a tough stance on derivatives. And it may have begun the process of mobilizing a new progressive base in Arkansas that can take on the next fight, starting with competitive U.S. House elections in 2010.

But it also revealed that, when fighting against such big odds, nothing takes the place of long-term strategy rooted in strong local organizing.

And sometimes, the establishment is just as powerful as you say it is.

A pivotal year for Southern workers

Labor and business battle for soul of Southern Democrats