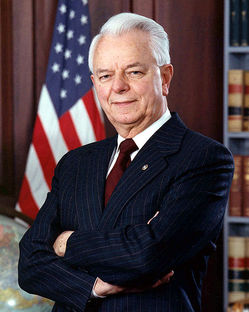 Byrd joined the Senate in 1959, going on to become not only the longest-serving Senator in history but also the longest-serving member of Congress. During his time in Washington, he witnessed enormous changes in his country and his home state of West Virginia.

He also underwent enormous changes in his own political outlook, evolving from a Ku Klux Klan leader to a defender of civil rights, and from a staunch advocate of the coal mining industry to an outspoken critic of some of its most destructive practices.

"He scaled the summit of power, but his mind never strayed from the people of his beloved West Virginia," said President Obama. "He had the courage to stand firm in his principles, but also the courage to change over time."

Born Robert Carlyle Sale in North Wilkesboro, N.C. in 1917, he lost his mother the following year in the flu pandemic. He was adopted by an aunt and uncle who renamed him Robert Carlyle Byrd and reared him in the coalfields of southern West Virginia, where he went on to become the valedictorian of his high school class.

Too poor to attend college right away, Byrd was working as a butcher in the early 1940s when he recruited 150 of his friends and acquaintances to form a chapter of the Klan. He later expressed regret for his involvement with the white-supremacist group.

"I know I was wrong," Byrd said in a 2005 interview. "Intolerance had no place in America. I apologized a thousand times ... and I don't mind apologizing over and over again. I can't erase what happened."

Byrd didn't immediately make the leap from Klansman to civil rights advocate, though: In fact, he was part of a group of senators that filibustered the Civil Rights Act of 1964. He also opposed the Voting Rights Act of 1965, though he voted for the Civil Rights Act of 1968. He later said that his membership in the Baptist church led him to change his racial views, but the need to abandon his segregationist position in order to join his party's mainstream was surely a factor in his evolution.

Nevertheless, by the early 2000s Byrd had built a reputation as a staunch advocate for civil rights, earning a 100 percent approval rating from the NAACP. He also championed funding for a national memorial to honor the Rev. Dr. Martin Luther King Jr.

"The greatness of women and men is often best judged from an historical perspective," he said at the time. "History gives us the detached perspective that allows us to better understand and appreciate the person, the cause, and the legacy."

Byrd used his post as chairman of the Senate Appropriations Committee to fight West Virginia's entrenched poverty. He brought the state billions of dollars in federal funding for highways, dams and research institutes.

He also came to temper his staunch support of West Virginia's coal mining industry with a growing concern for the land and people who suffer its destructive impacts. He became particularly outspoken about the ecological and economic ravages of mountaintop removal mining.

"In recent years, West Virginia has seen record high coal production and record low coal employment," Byrd said in a speech he made late last year in which he called on the coal industry to embrace the future. "The increased use of mountaintop removal mining means that fewer miners are needed to meet company production goals."

He noted the reality that mountaintop removal mining has diminishing support in Washington. "It is not a widespread method of mining, with its use confined to only three states," he observed. "Most members of Congress, like most Americans, oppose the practice, and we may not yet fully understand the effects of mountaintop removal mining on the health of our citizens."

Byrd was an outspoken critic of Massey Energy, the owner of a West Virginia mine where an April explosion killed 29 workers. One of Byrd's last public actions as a senator was to blast Massey and CEO Don Blankenship at a recent Senate hearing.

"Throughout his historic career in the House and Senate, he never stopped working to improve the lives of the people of West Virginia," House Speaker Nancy Pelosi said in a statement. "While some simply bore witness to history, Senator Byrd shaped it -- and strove to build a brighter future for us all."

The politics behind Sen. Graham's 'yes' on Sotomayor