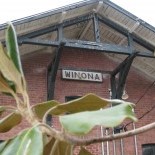 An African American man, Curtis Flowers, made history this week when he became the first person in U.S. history to ever go on trial for murder six times for the same crime.

Mr. Flowers has been in jail in Mississippi since 1996, accused of the murder of four people at a furniture store. Jury selection started this week in tiny Winona Mississippi, population 5,482.

Winona, known as the "Crossroads of Mississippi," is a small town in a small poor rural county 120 miles south of Memphis and about 100 miles north of Jackson Mississippi. Winona is in Montgomery County. The total population of the county is just over 12,000.  The county is 45 percent African American. The median home value in Winona is $51,000.

A 2004 conviction was reversed after the prosecutor exercised all fifteen of his peremptory strikes on African Americans. The Mississippi Supreme Court said that trial "presents us with as strong a prima facie case of racial discrimination as we have ever seen..."

The fourth and fifth trials ended in mistrials when the juries were not able to reach a unanimous verdict.

On Monday, because the trial is in such a small county, nearly all the prospective jurors had some relationship to the case through family, school or work. Four white prospective jurors were law enforcement officers and admitted they had guarded or transported Mr. Flowers -- but they said they could consider the case impartially. Prospective African American jurors spoke about their association with the Flower's family through work, family, church, and a popular gospel group headed by Curtis' father Archie Flowers. One juror spoke of his moving experiences with Curtis Flowers after meeting him through his church group's prison ministry.

On Tuesday, Lajuanda Williams, an African American law student from the Mississippi College of Law, was followed and then stopped by Montgomery County law enforcement as she drove to Mr. Flowers' trial.

Ms. Williams drove from Jackson Mississippi to Winona to start her first day observing the murder trial. She is spending the summer as an intern in the Mississippi Office for
Capital Defense. As she was approaching Winona, a Montgomery County police car followed her for about a mile then turned on his lights and pulled her over.

When she rolled down her window, the officer instructed Ms. Williams to place her hands on the steering wheel and not look at him, look directly ahead. She complied. She knew she had not been speeding and had broken no laws.

He asked Ms. Williams where she was going. She asked him, "Have I broken any laws?" He responded, that's not the question I asked you. What I asked is where are you going? Ms. Williams said "There should be some reason why you pulled me over." The deputy said, I'm going to ask you again. Where are you going? She told him, "I'm going to the courthouse." He then asked her, what is your business in Winona? She told him, "It is not any of your business why I am here in Winona." He said, if that's where you're going, you need to drive straight to the courthouse and stay out of trouble.

The police car then followed Ms. Williams for about 500 feet and then turned off.

During the entire exchange, Ms. Williams recalled many stories from African Americans in her home state of Mississippi who had been tasered and injured by officers during stops just as this. She fully complied with deputy's order to look directly ahead. The deputy never
gave her any reason for the stop. She was not asked for her license. She was not warned. She was not ticketed.  Unfortunately, because she was ordered to look straight ahead, Ms. Williams was not able to identify the deputy.

Ms. Williams then drove to the courthouse to begin the first day of her internship. She was angry but not surprised. "I know the reality of being African American in a place like Winona", she said. Two white interns, second year law students at the University of San Francisco, were not stopped when they drove into Winona on Wednesday.

In court on Wednesday, defense counsel sought to bring up the incident with law enforcement to the attention of the judge. The prosecutor angrily objected. Defense counsel asked permission to put Ms. Williams on the stand. The Judge said "We're entering the theater of the absurd here" and that he was not interested in hearing about what happened to Ms.
Williams. He said that he could not control everything and the stop, if it occurred, which he did not believe, didn't have anything to do with the case. He ordered the jury questioning to continue and refused to take any evidence of the stop of Ms. Williams.

Ms. Williams told Alan Bean of Friends of Justice why she thought she was stopped. "I think it came from the trial and the injustice that has been permeating this town for years. You can cut the tension in Winona with a knife."

Why bring it up and risk the anger of the judge and prosecutor? "I could not sleep last night," she explained, "I kept thinking about my daughter, she's three years old. I kept thinking I had to do something so that she doesn't have to go through what I just went through."

While jury selection continues, the U.S. Department of Justice has been asked to investigate the Mississippi law enforcement harassment of Ms. Williams.

Despite all this, when asked how Curtis Flowers was holding up during the trial, his mother Lola Flowers replied "Well, he's got the faith."

For the criminal justice system in Winona Mississippi, as in many other places, William Faulkner said it best. Faulkner, Mississippi native, author, and Nobel Prize winner, wrote, "The past is never dead.  It's not even past."

For more information and updates on the case of Curtis Flowers, see http://friendsofjustice.wordpress.com

Bill is Legal Director of the Center for Constitutional Rights. Audrey Stewart is a Mississippi native and a public school teacher in New Orleans. Davida Finger and Bill are professors at
Loyola University New Orleans. You can reach Bill at quigley77@gmail.com<