Skip to main content
Join the voice for a changing South.
Donate Today
By Chris KrommJuly 8, 2010 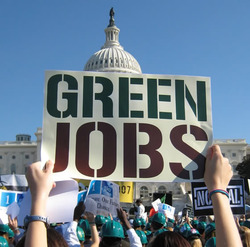 One of the most striking things we learned meeting with community leaders in the Gulf Coast recently is how deeply conflicted coastal residents are about offshore oil drilling.

All of the people and groups Facing South talked to -- from Dulac, Louisiana to Moss Point, Mississippi -- were suffering in some way from the BP spill. But most, even bona-fide environmentalists, were at best ambivalent about calls to ban drilling in ocean waters.

This was especially true of fishermen, despite the fact that BP's disaster has closed a third of Gulf waters and undermined their very livelihood. We quickly found out why: Many of the fishermen also worked on oil rigs in the off-season. And even those who didn't work on rigs knew that thousands of Gulf jobs depend on the energy industry; in the absence of alternatives, they're staying pro-drill.

This highlights what may be the most critical point in the national debate over offshore oil drilling: The public is increasingly wary of drilling in our oceans in the wake of the BP disaster, but the only way environmentalists are going to cinch the debate is if they can offer compelling economic and energy alternatives.

The polls clearly show a backlash against the "drill, baby, drill" mantra. The Pew Research Center has found a 19-point drop in support for increased offshore drilling since the spill: In February, 63% supported more offshore drilling; as of late June, a majority (52%) opposed it. A new Public Policy Polling survey in North Carolina, a state that was included in Obama's earlier plans to expand offshore projects, finds that for the first time a plurality (46%) in NC now oppose offshore drilling.

But those anti-drilling views aren't shared in Gulf Coast states, even as BP's oil washes onto their shores. A Rasmussen poll in late June found 79% of likely Louisiana voters support offshore drilling and another found 70% support in Texas. Rasmussen's surveys have always found higher support for offshore drilling than their peers, but in this case their findings are in line with other polls.

The overall message here: Even after our worst oil spill ever, only small majorities nationally oppose offshore drilling. And residents of states who rely on the oil economy still fiercely support it. In a simple pro/con debate over offshore drilling, there isn't enough political momentum to end the exploration and extraction of oil in the oceans.

But what the public can respond to are clear alternatives. As polling guru Ruy Teixeira of the Center for American Progress points out in his analysis of the Pew survey, while the country is deeply divided about offshore drilling, it's positively enthusiastic about clean energy:

Compare those views on allowing more offshore drilling to the robust support for requiring that new homes and buildings meet higher efficiency standards (78 percent), for increasing federal funding for research on wind, solar, and hydrogen technology (75 percent), and for spending more on subway, rail, and bus systems (64 percent).

Whether or not the public wants to make the needed sacrifices, or politicians have the will to push for such measures is another story, which David Roberts has been exploring in a series of thoughtful pieces at Grist.

But the support for a new energy future is there. And at a time when millions in the country are out of work -- including thousands dislocated by the BP disaster -- public sentiment for clean energy could be even stronger with a focus on green jobs.

Green jobs have lots of job-creating potential in the Gulf. A 2009 study from the Center for American Progress and Political Economy Research Institute projected that a $150 billion investment through the American Recovery and Reinvestment Act (passed in 2009) and American Clean Energy and Security Act (in jeopardy) could generate 325,000 green jobs [pdf] in the five Gulf Coast states (Alabama, Florida, Louisiana, Mississippi and Texas.)

In fact, the report estimates such green job investments could create 29,000 jobs in Louisiana alone -- an amount nearly identical to the number affected by Obama's six-month moratorium on deepwater drilling.

The problem is that, like any economic transition, the shift to green jobs will take time -- something in short supply in a region reeling from hurricanes and an oil spill. That's why many Gulf Coast community leaders are also pushing for more immediate investments in Gulf job creation, like the post-Katrina idea of a Gulf Coast Civic Works program.

Politics aside, an immediate Gulf jobs program is surely doable: If BP can quickly put thousands of fishermen to work cleaning up oil, why can't Washington do the same for jobs focused on coastal restoration, green building and other vital projects?

Now more than ever, those seeking to break our country's -- and the Gulf Coast's -- addiction to oil and offshore drilling need to offer such practical, common-sense economic alternatives, both short-term and long-term.

STILL, BABY, STILL? Some Southern leaders rethink offshore drilling in wake of disaster, but most stay the course