Skip to main content
Join the voice for a changing South.
Donate Today
By Sue SturgisJuly 26, 2010 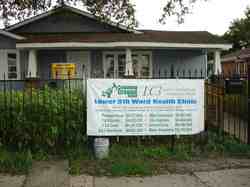 Among the many victims of the levees that failed in New Orleans following Hurricane Katrina was Charity Hospital, a historic institution that played a critical role in caring for the city's large uninsured population.

In the wake of the floods, Louisiana State University chose not to reopen the hospital but instead build a more modern one. To compensate for Charity's loss, the federal government funded a network of some 90 neighborhood-based health clinics that provide care to the uninsured.

But the federal funding for the clinics could soon dry up -- even though Charity's replacement has still not been built. That could spell disaster for a safety-net system that has served about 100,000 people since Katrina. And the loss would come at a time when the region's residents are facing new physical and mental health threats related to the BP oil-spill catastrophe.

A $100 million federal grant to Louisiana has supported the clinics in the four-parish Greater New Orleans area since 2007, but the money will run out on Sept. 30. The Primary Care Access and Stabilization Grant funded 25 public and private nonprofit organizations that provide services including primary health care, mental health counseling and substance abuse treatment in Orleans, Jefferson, Plaquemines and St. Bernard parishes.

A recent report from the federal Government Accountability Office raised the concern that "the primary care gains made in the greater New Orleans area may not be sustainable after PCASG funding ends."

That would have major implications not only for the people who rely on the clinics, but for the positive changes that have come about in the way health care is delivered in the New Orleans area.

"One of our concerns pre-Katrina was care-seeking behavior, because for generations, people would go to hospital and rely on the emergency room," Joseph Kimbrell, chief executive of the Louisiana Public Health Institute that administers the grant, recently told the medical journal The Lancet. "That paradigm has forever changed here and the influx of dollars made that possible."

A survey released earlier this year found that in the New Orleans region more than 100,000 adults between the ages of 19 and 64 do not have health insurance. The region has one of the highest rates of uninsured adults at 22%, compared to 18% nationwide.

Before Katrina, many of the uninsured sought care at Charity's emergency room or its outpatient clinics. But as Kimbrell noted, the neighborhood health clinic network was successful in reducing reliance on costly emergency room care. It is also able to treat patients more holistically, Karen DeSalvo, a professor at Tulane's medical school, told the Lancet:

"The clinics have been thinking about how best to relate to their community," said DeSalvo. "There's no point just prescribing insulin to a diabetic if that patient's landlord hasn't fixed the electricity because the insulin has to be kept cold. Or, instead of just telling a patient to eat more vegetables, they give them a list of farmers' markets in their neighborhood that also take food stamps."

Louisiana has requested a federal waiver of Medicaid rules in order to allow Medicaid funds to be used for the clinics. Negotiations are underway for that waiver, which has the support of the New Orleans City Council, the state's congressional delegation and the New Orleans Business Council, among other groups. The state, LPHI and organizations that run the clinic are working to submit a formal request by Aug. 15.

In the meantime, one of the clinics affected -- the New Orleans Musicians' Clinic, which has been serving the city's vibrant musical community since 1998 -- is turning to the public for support. It's issued an urgent appeal in the form of a website and video asking people to contribute to keep the facility afloat.

"A lot of our musicians fall between a rock and a hard place," New Orleans rhythm and blues icon Deacon John says in the video. "They're too young for Medicare and Social Security, they're not totally disabled, and they can't afford private health insurance."