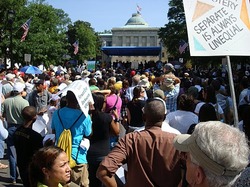 A thousand people marched through the streets of North Carolina's capital yesterday to protest the local school board's dismantling of a lauded student assignment policy based on economic diversity in favor of neighborhood schools -- a move many fear will lead to de facto re-segregation.

Nineteen protesters were arrested, all for nonviolent infractions and most for disrupting the the school board meeting that followed the march by holding hands, chanting and refusing to leave the podium.

The morning march through downtown Raleigh was led by the state NAACP with support from churches, student groups and civil rights organizations. Among those who spoke at the rally following the march was Tim Tyson, a Duke University historian and a board member of the Institute for Southern Studies, which publishes Facing South.

"We are snared in a historical dilemma, but we need not remain so," Tyson told the crowd.

Earlier this month, Tyson, state NAACP President Rev. William Barber, Rev. Nancy Petty of Pullen Memorial Baptist Church, and Wake schools parent and activist Mary D. Williams were banned from school property after being arrested on charges of second-degree trespassing for disrupting a meeting of the Wake County school board.

Barber and Petty were arrested again yesterday for defying the ban, which was imposed even before their cases were heard in court -- an illustration of the growing rancor between the new conservative school board majority and community members who actively oppose them.

The controversy began last year when elections were held for four of nine school board seats in Wake County, the state's largest school district. Conservative candidates backed by Republican politicians including former state Rep. Art Pope -- a businessman and director of the right-wing group Americans for Prosperity -- won all of those races, joining an ally already on the board to create a new conservative majority.

The districts where the elections were held were primarily white and suburban or rural. No seats were up in the four districts representing most of Raleigh, where the county's low-income and minority populations are concentrated, and where the board members support the diversity policy. The county's school board members are all elected from geographic districts, with no at-large representatives.

As promised, the new majority immediately set out to dismantle the diversity policy instituted in 2000. Rather than assigning students by race, which courts have rejected, the policy assigned them in part by economics, using the number of students receiving free or reduced-price lunches as a guide. The new board plans instead to divide the county into "neighborhood attendance zones" to be phased in over the next several years.

Because residential neighborhoods tend to be divided by income, there are well-founded fears that the new policy will inevitably end up limiting economic diversity. A research paper by the Wake Education Partnership -- a nonprofit launched by the local business community to support public schools -- found the plan would lead not only to concentrated poverty in some schools but also overcrowding.

On average, students from high-poverty schools do not perform as well on assessments of reading and math, according to a recent analysis by the National Center for Education Statistics. They also have higher drop-out rates and are less likely to go on to college.

Wake is not the only North Carolina school district where there are concerns about re-segregation. New Hanover County, which includes the city of Wilmington, has been debating a redistricting plan that would focus on neighborhood schools. Last year, the state NAACP filed a federal civil rights complaint against Wayne County schools for creating a "district of apartheid education," with one attendance district in the county seat of Goldsboro almost 100% black and another about 90% white. And Mecklenburg County, home to Charlotte, adopted a "school choice plan" in 2002 that resulted in dramatic re-segregation of its schools.

And North Carolina is not the only state experiencing school re-segregation. In 1954, when the U.S. Supreme Court outlawed segregated public accommodations, the percentage of black students in majority-white schools across the South was only 0.001%, according to a 1999 report [pdf]. By 1988, when integration peaked, that percentage had climbed to 43.5%. But by 1996, five years after a Supreme Court decision allowing a return to neighborhood schools, the number dropped to 34.7%.

However, the South is doing better in terms of school diversity than big cities in the Northeast and Midwest, where schools are most segregated. Nationwide today, the portion of black students who attend what a recent report called "intensely segregated schools" is 39%.

In Wake County, the planned move away from economic diversity in schools clearly isn't going to happen without a fight. Since the school board announced its decision to end the diversity policy, a people's movement has emerged to challenge the decision, with raucous protests at board meetings and the creation of pro-diversity groups such as the Great Schools in Wake Coalition and the student-led Heroes Emerging Among Teens, or N.C. HEAT, which had members arrested yesterday.

For now, the board majority says it's undeterred by the protests and will move ahead with neighborhood schools. But this November, it will face another challenge that will be harder to ignore: elections for the county commissioners who control the school district's budget.

Democrats are already spending heavily to support candidates who back the economic diversity policy -- and Republicans acknowledge they're at a financial disadvantage because of all the money they spent on last year's school board election.

(Photo of the July 20 Raleigh protest march by Jerimee Richir, Facing South's social media director. To see more of Jerimee's photos from the march, click here. To see the mugshots of  those arrested, click here.)