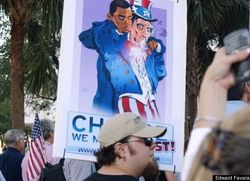 The NAACP's resolution calling on Tea Party activists to repudiate "racist elements" in their ranks has met with predictable outrage from Sarah Palin and others on the right. The truth is, the NAACP pulled its punches. It backed away from a blanket condemnation of the party as racist -- a tactful and crucial distinction that the national convention was right to make.

It's also true that Tea Party leaders admit that people at their events have spouted racist slurs -- slurs the same leaders claim to have denounced. That's an arguable point. Meanwhile, the question remains: Is the Tea Party racist or not? And what kind of a threat does it represent?

The NAACP is only the latest to weigh in on this debate. There's a widespread public perception that the Tea Party is chock full of unreconstructed bigots who have been whipped into a fury by the mere thought of a black man in the White House.

The Obama Joker posters, the Obama as Hitler billboard, the crude racist scrawls on signs, the Confederate flags, the comments by Tea Party-backed Kentucky GOP Senatorial candidate Rand Paul questioning the need for the 1964 Civil Rights Act -- none of this has dispelled the notion that the Tea Party is a captive of, if not a wholesale creation of, racists. And if so, the party represents a mortal danger to civil rights and justice concerns.

But this analysis is far too simplistic. Worse, it erects a hopeless barrier to understanding why the Tea Party roared onto the scene and why it may have some staying power beyond 2010.

In April, a survey by the Winston Group, a GOP strategist firm, shocked many when it found that four in 10 Tea Party adherents are not Republicans, but independents or Democrats. A follow-up New York Times survey revealed that Tea Party backers are not ill-educated, low-income, blue-collar whites. The majority is middle class, and many are highly educated and wealthy. No matter what their former politics or party affiliation, the single overriding factor that drives them is the feeling that the country is heading in the wrong direction.

This is not merely a case of respondents giving politically correct answers to pollsters so they don't appear to be racist. Nearly two decades ago, the GOP found that, far more effectively than crude race baiting, the volatile mix of big government and a shaky economy could whip frustrated, rebellious, angry whites into a frenzy. Many middle-class and working-class white males genuinely viewed government as big, insensitive, and a hopeless captive of special interests. Though it was more perception than reality, many more deeply believed that they were losing ground to minorities and women at work, in school, and in society as a whole.

The target of their anger was a big government whose spending priorities tilted unfairly toward social programs that benefited minorities at the expense of hard-working whites. That translated to even more fear, rage and distrust of government and calls to resist the erosion of long-held values. Tea Party activists pound on Obama, the Democrats, government, the elites, and Wall Street. But they also grouse about abortion, gay rights, taxes, gun rights -- in other words, about many issues besides race.

Right-wing populism, with its mix of xenophobia and loathing of liberal "tax and spend" government, was the engine that powered Ronald Reagan and George W. Bush to the White House, not to mention waves of GOP governors, senators and members of Congress seeking office. In 2008, many of these GOP grassroots voters stayed home. Even Sarah Palin wasn't enough to budge them to the polls. Their defection was more of a personal and visceral reaction to Bush's bumbles than a radical and permanent sea change in overall white voter sentiment. They were ripe for the Tea Party movement -- or any movement that channeled their frustration and fury into action.

Tea Party leaders push back against the charge that they are racist by citing widespread popular anger at Washington and mainstream politicians. They claim the "socialist-leaning" Obama administration, with its runaway spending programs, is the sole cause of this rage. The evidence is compelling that this is a sincere, if wrongheaded, belief.

The NAACP was right to call out the Tea Party for saying and doing virtually nothing about the bad actors that spew their racism within the movement. These bigots create mischief and havoc, poison the racial air, and in some cases pose a physical danger.

Tea Party leaders should welcome, not curse, the NAACP for pointing that out.

(Photo of a sign at a 2009 tea party rally from ginandtacos.com.)