According to the White House figures, the American Recovery and Reinvestment Act has saved or created just over 3 million jobs -- including nearly 1 million in 13 Southern states.

The estimates -- especially for the number of jobs potentially "saved" thanks to the stimulus bill's impact on the overall economy -- involve modeling that is far from an exact science, although the report does take pains to cite a variety of government and independent sources to confirm its conclusions.

Based on their data, here's a chart with the state-by-state numbers: 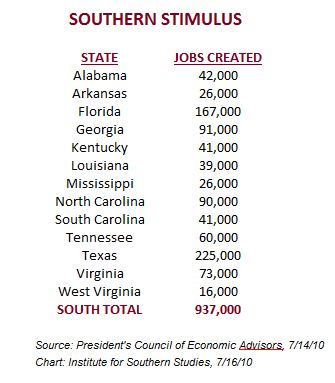 The Southern numbers are especially notable given the political battles over the stimulus last year. The government's data show that some of the biggest job gains came in states led by governors who vocally opposed the stimulus bill:

* In Texas, Gov. Rick Perry (R) initially rejected $555 million in stimulus money for unemployment benefits (although later changed his mind) and even suggested Texas might have to secede from the United States. The White House estimated 225,000 jobs were created or saved in Texas, second only to California.

* In Louisiana, Gov. Bobby Jindal (R) savaged a "stimulus bill that has not stimulated" (although, less than a day after that, he did a photo op celebrating a stimulus-funded project). The government credits the stimulus bill with creating 39,000 jobs in Louisiana.

* Mississippi's Gov. Haley Barbour (R) was a staunch opponent of the stimulus, and suggested on Fox News this year that it's only created government jobs. The Mississippi stimulus impact: 26,000 jobs.

* This week, Virginia Gov. Bob McDonnell (R) said it's "hard to say" how much impact the stimulus has had in his state, allowing it may be responsible for up to 14,000 of the 72,000 jobs created on his watch this year. The White House estimates 73,000 jobs from the stimulus overall.

Of course, these numbers don't even count a big source of Southern job stimulus this summer: the 2010 Census, which just last month was employing over 100,000 people in 11 Southern states.