Skip to main content
Join the voice for a changing South.
Donate Today
By Labor NotesAugust 18, 2010 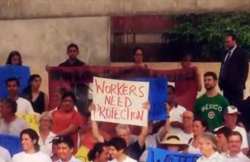 In oppressive heat, Austin construction workers labor without breaks -- some without even water. Workers and allies involved with the Workers Defense Project, which works with immigrant day laborers in the city, symbolically endured similar conditions in their creatively named "Thirst Strike."

For six hours in the heat of one late June day, participants went without water in front of City Hall to call attention to the brutal working conditions many Austin construction workers undergo. This action, along with a vigil in memory of workers killed by construction-related injuries, spurred the City Council to unanimously pass a rest-break ordinance on July 29.

The new law requires a 10-minute break for every four hours of work on a construction site, and that the ordinance be posted in places of employment. Employers who don't comply face fines of $500 per day. The provision, though seemingly modest, is a boost for the 50,000 construction workers of Austin, union and non-union.

Fifteen percent reported that they personally knew someone who had died from a construction-related injury, and 76 percent had no health insurance.

Previously, the Austin group, working with allies, managed to defeat anti-day laborer bills at both the state and city level, and recovered more than half a million dollars for workers who were victims of wage theft.

Workers' protections are minimal in the state. Texas doesn't even mandate that employers participate in the workers compensation system.

Organizers are predicting the new ordinance could help change that. It could be duplicated in other Texas cities, said Christina Tzintzun, organizer for the Workers Defense Project.

She said the group plans to seek a state-level law, too. "It is definitely an uphill battle," Tzintzun said, "but one that we're starting."

Thank a worker this holiday season