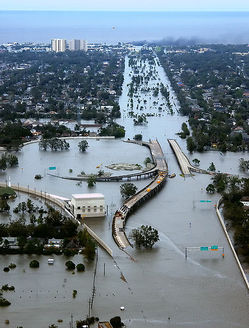 To understand where the hurricane protection system for New Orleans stands today, it's helpful to go back to 1965.

That year, Hurricane Betsy made landfall near the mouth of the Mississippi River, causing devastating flooding in the city that was blamed on poor levee construction and maintenance. In response, Congress passed the Flood Control Act of 1965, which took primary responsibility for flood protection away from local levee boards and authorized the U.S. Army Corps of Engineers to build a new flood protection system. That project was nearing completion when Hurricane Katrina struck, leaving 80 percent of the city underwater.

The Corps' official report on the Katrina disaster, conducted by its Interagency Performance Evaluation Taskforce and released in 2006, concluded that its project had been a failure. It found that the "hurricane protection system in New Orleans and southeast Louisiana was a system in name only."

Those revelations led to widespread calls for Corps reform. The following year, Congress passed the Water Resources Development Act of 2007, which included a provision requiring outside review of proposed Corps projects.

But the Corps now appears to be trying to skirt the requirement for outside review. While the agency indicated in 2008 that about 20 of the projects being planned to expand the region's hurricane protection system would be reviewed by outside experts, it now appears that fewer than 10 will be independently examined.

One of the projects being excluded from the outside review process is a controversial 20-mile floodwall system in St. Bernard Parish, where the Corps is allowing use of steel pilings that aren't coated to protect against corrosion.  Flood and coastal protection advocates have raised concerns that projects being excluded from review could have major impacts on the health and safety not only of St. Bernard Parish but also New Orleans East and the city's Lower Ninth Ward, which was devastated by the 2005 flooding.

A March 2010 report [pdf] on WRDA 2007 by a U.S. House committee called the law a "breakthrough statute" that included "the most sweeping reforms" of how the Corps carries out its projects.

"However," the report went on, "rather than swiftly and enthusiastically embracing the reforms of WRDA 2007, the Corps has been slow in its implementation, and has often modified its implementation to fit its intended results at the expense of the language of the statute and Congressional intent."

WRDA 2007 also authorized Congress to allocate billions of dollars for hurricane protection and coastal restoration projects in Louisiana, as well as for full 100-year flood protection for the greater New Orleans area. However, the Corps' history of missing deadlines raises concerns about whether the work will be completed on time.

As of May 2010, the office of U.S. Sen. David Vitter (R-La.) had tallied 14 critical deadlines that the Corps had missed since Katrina and Rita -- so the Senator retaliated with a delay of his own, holding up the promotion of General Michael Walsh, commander of the Corps' Mississippi Valley Division, to Major General.

"I decided that the Corps leadership should be impacted by their own mistakes and delays just like Louisianians have for years," Vitter said.

The Senator dropped his hold on Walsh's promotion in mid-May after receiving commitments from the Corps to move forward with long-delayed projects. The agency promised among other things to complete the strengthening of canal walls in the New Orleans area by June 2011. As a reminder, it hung a banner in its New Orleans headquarters that reads, "The Corps of Engineers has committed to provide a 100-year level of protection by 1 June, 2011 ... or break our backs trying."

But even if the new $14 billion hurricane protection system for the New Orleans area is completed on time, there will be other worries -- like where the money will come from for its operation and maintenance.

While increased costs are anticipated in all five parishes involved in the project, the lion's share will be borne by three local levee districts, including the Orleans district. Property taxes now provide most of the revenue in those districts, but those tax rates are already at or near maximum levels set by law -- and levee officials fear that property taxes alone won't be enough to support the new system anyway.

Meanwhile, many are still demanding an independent investigation of the Corps' flood protection failures in Katrina's wake. Led by the New Orleans-based Levees.org and endorsed by groups ranging from the New Orleans Chamber of Commerce to Environmental Defense,  advocates of an independent probe point out that the IPET study was managed and led by the Corps, which also built the failed system -- a "clear conflict of interest," according to Levees.org.

At the same time, two major independent research teams that analyzed the levee failures have come up with findings that differ significantly from the IPET's, calling its conclusions into question -- and leaving local residents with a lingering sense of insecurity.

"The levees are too important, and what happened when they failed too horrible for us to rely on a self-study," says Levees.org. "The Army Corps of Engineers cannot predict the future and properly develop a flood protection system if it does not understand the past."

4 Years After Katrina: The legacy of Katrina, by the numbers