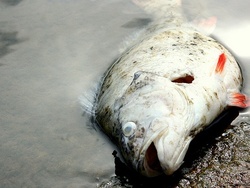 Over the last week, a curious media spin on the BP spill has taken hold that suggests the impact of the disaster has been more hype than reality. It started with conservative bloggers, and soon rippled into Time, The Wall Street Journal and other major media, who now suggest it's a "disaster that never materialized."

It's true that a handful of alarmists may have peddled doomsday scenarios of Gulf apocalypse that were about as believable as a Glenn Beck tirade about President Obama marching us to fascism.

But most scientists agree (with the possible exception of those employed by BP) that it's far too early to write off the possibility of long-term consequences from releasing 210 million gallons of oil into the ocean.

What's more, it's clear that even the good news -- like the fact that cleanup crews are finding less oil -- only raises more questions about where the pollutants have gone, and how they could be affecting the delicate ecology of Gulf waters.

A case in point: the growing Gulf Dead Zone. Since Facing South first wrote about the link between the Gulf Dead Zone and the BP oil spill on July 1, there's been growing coverage of the massive area of water in the Gulf of Mexico that's so deprived of oxygen that it's uninhabitable to sea life much of the year.

The leading culprit is thought to be mega-farms in the Midwest, whose nitrate-filled fertilizers run off into the Mississippi River and are carried to the Gulf, where they feed massive algae blooms that starve the ocean of oxygen when they decompose (a process known as hypoxia).

But scientists soon feared that the BP spill could make the Gulf Dead Zone -- already the biggest in the world -- even larger, thanks to methane pumping out of the failed Deepwater Horizon well, which can have the same effect of boosting ocean microbes that deplete the ocean of oxygen.

This week, the Louisiana Universities Marine Consortium announced that this year's Gulf Dead Zone was one of the biggest in history: 7,722 square miles, or just smaller than New Jersey.

Scientists say there's not enough data yet to say whether the Dead Zone's growth is due to the BP spill, although in June a team from Texas A&M University and the University of California at Santa Barbara found "depletions of oxygen up to 30 percent" in areas with elevated methane near the spill.

Indeed, this means that one of the very talking points used by those who downplay the spill's impact -- that microbes are naturally eating and breaking down Gulf pollutants -- signals a growing threat to the Dead Zone.

According to Dr. Mandy Joye, a marine scientist at the University of Georgia who has been studying the Gulf of Mexico for 15 years, the microbes clearing away some of the oil, methane and other pollutants are robbing oxygen from other marine life:

The degradation of this oil and gas being injected in the gulf of Mexico is going to cause oxygen depletion in the water, there's no way around it ... The microbial community is going to break this down, but it doesn't come for free, it comes at the expense of the oxygen budget of the system, and that's something that's not easily corrected.

The upshot: While some of the most nightmarish scenarios of the BP disaster's impact may not come true, it's inevitable that releasing vast amounts of pollutants will alter the web of ocean life in the Gulf -- and the consequences will likely be seen for years to come.

Life in the Gulf Dead Zone